In one of his routines, Eddie Izzard explains why supermarkets don’t have toilet rolls on display near the entrance in case you think “this is a poo shop! Everything in here is poo!”. Your first impression of The Peculiar Memories of Thomas Penman may well be similar, as the first chapter revels in the scatalogical detail of the eponymous Penman’s difficulties at school. Blackly funny and completely offensive, the opening chapter sets the tone for the rest of the book.

You could be forgiven for thinking this is indeed a “poo” book. Defecation is everywhere, from Penman’s emergencies in the classroom to the war of attrition – expressed through the medium of dog shit – waged by his uncommunicative parents. This is definitely not a book for the easily offended, encompassing Thomas’ Grandfather’s secret stash of pornography (including photographs of “a woman with a duck up her arse”), teenage opinions of sex and general unpleasantness. Robinson, however, manages to stay the right side of offensiveness and his novel is highly amusing whilst packing a hefty moral punch.

The novel is essentially a rites-of-passage story, covering Penman’s first love and first experience of mortality, although the unpleasantness of the subject matter makes The Peculiar Memories of Thomas Penman considerably funnier than the typical tale of growing up. Penman’s infatuation for the far-from-perfect Gwen cures him of his obsession with his own bodily functions, and we follow his predicament as his home life becomes increasingly demented. Robinson has a deceptively light touch and manages to create as many uncomfortable laughs of recognition as he does belly-laughs, particularly when Thomas describes his feelings for the love of his life or deals with the first fumblings of teenage sex. Similarly the parental discord of Thomas’ dysfunctional family is exaggerated to the point of parody without losing its horror. 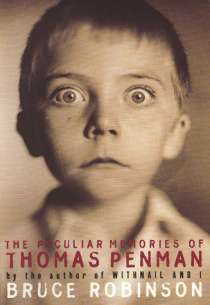 The dialogue is bang-on for most of the book and both Thomas’ secretive relationship with his Grandfather and his attempts to discover the man’s dark secret are simultaneously funny and touching. It’s the details, however, which will have you squirming – from Thomas’ Grandfather’s recollections of the Great War to conversations about sex where the girl “would have done it” if the boy had been able to produce a more appropriate form of protection than a three-foot condom found washed up on the beach. The ill-informed bravado of teenage boys is particularly well-drawn and the scenes where Thomas attempts to smoke cigarettes or discuss sex with his best friend are painfully funny.

Bruce Robinson has been lauded primarily for writing and directing the cult hit “Withnail and I”, although his credits also include the screenplay for “The Killing Fields”. He’s clearly a very talented writer and, in …Penman, manages the difficult task of balancing manic humour and pathos. The war scenes in particular are graphic and powerful, and the scenes where Thomas speaks with his Grandfather on his death-bed are especially poignant. Reading this book you’re left with the distinct impression that Bruce Robinson can turn his hand to manic comedy and serious story-telling with equal ease.