For anybody who read his first book, The Missing, it’s no surprise that Andrew O’Hagan has written a novel. While his debut book was non-fiction, its vivid evocation of O’Hagan’s childhood in Ayrshire and Glasgow and his poignant tales of the parents of missing children felt like a gripping thriller instead of limp reportage. Here was a writer with an unusual empathy for people and the ability to look at situations from an unusual and refreshing perspective.

The promise of O’Hagan’s debut is fulfilled in Our Fathers, a sober and touching account of three generations of the same family and their tensions. Hugh Bawn is “Mr Housing”, the man whose dream of demolishing Glaswegian slums and replacing them with hi-tech tower blocks earned him high acclaim during his career and damnation in his retirement. As he lies dying in one of the very tower blocks he dreamed of building, his grandson Jamie tends to the ailing visionary. Like his grandfather, Jamie believes passionately in providing affordable housing for the masses, but his vision involves the demolition of his grandfather’s constructions, cities in the sky whose initial promises have crumbled like the concrete from which they were made.

Through the relationship between Jamie and his grandfather we learn of Jamie’s own father (Hugh’s son), an alcoholic who “rages and mourns”. Violent and oppressive, the man’s increasingly unhinged behaviour forces the estrangement between father and son, husband and wife, and as the book progresses we see Jamie’s career as a direct reaction to his father. Where Hughie sought to build Jamie’s father seeks to destroy, hitting out at the world with words and fists. 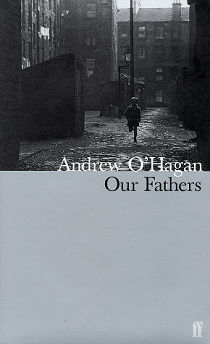 Although Our Fathers is essentially a tale of growing up and accepting who you are and where you came from – as Jamie returns to the town of his youth it soon becomes apparent that his father and grandfather are as idealistic and as flawed as he is himself – the novel is full of hope. Jamie’s encounters with his grandfather are laced with humour and intelligence, and the closing chapters detailing the reunion of father and son are touching and bittersweet. A key character in the book is the landscape itself, with the constant regeneration of cities and towns a recurring theme. Jamie destroys the very buildings created by his grandfather, which in turn were built largely through a social conscience derived from the political beliefs of his great-grandmother.

O’Hagan has much in common with fellow Scots William McIlvanney and Jeff Torrington, with the political and personal lives of his characters inextricably linked. Like McIlvanney’s work, the novel takes place in rural Ayrshire with occasional forays into Glasgow and the Scottish Borders, and readers familiar with Torrington’s “Swing Hammer Swing” will recognise the stories of Glasgow’s infamous Gorbals estate as the slums were demolished and families shipped out to satellite estates.

Our Fathers is powerful and vivid, populated by characters given a depth and complexity that is sadly lacking in many modern novels. Where other authors seem keen to “dumb down” their work, O’Hagan’s novel burns with a fierce intelligence and demonstrates that, while other less talented writers may dominate the headlines, some of the most exciting modern fiction is indeed coming from Scotland.