Ethan Coen is one half of the deranged Coen Brothers, responsible for heights of cinematic lunacy including Saddam Hussein in a Busby Berkeley musical, attacks by squeaky-voiced German nihilists and Steve Buscemi in a wood-chipper. If you sat stony-faced through any of the Coen Brothers’ films (Fargo, Blood Simple, The Big Lebowski, The Hudsucker Proxy, Barton Fink) then Gates Of Eden will annoy the hell out of you. Fans of Jack Handey or the Police Squad television shows will, on the other hand, be in their element.

Coen’s trick is to take hackneyed clichés and give them a good kicking. The first story (“Destiny”) is the tale of a boxer-turned-detective who is completely inept both in and out of the ring; he considers selling advertising space on the soles of his boxing boots and points out to his trainer that yes, other boxers lose fights too but they usually manage to hit the other guy first. The characters are straight out of central casting and Coen writes with such relish as he piles stupidity on stupidity that it’s easy to picture him cackling and giggling as he types each line. The jokes are awful, predictable and hilarious.

While Raymond Chandler is ruthlessly parodied, the best stories are closer to the hard-boiled fiction of James Ellroy, albeit with more laughs. Gates Of Eden itself is a tale of a lone wolf agent fighting organised crime, a man who is perhaps too keen to use his fists in pursuit of his quarry. In CoenWorld, of course, there needs to be a twist and in this case the agent in question works for the Weights and Measures department, dispensing violent justice to garage owners who own badly calibrated pumps. When the story’s Mr Big is suspected of overcharging for vegetables in his grocery shop, the agent gets too close and is slipped a Mickey Finn before a jam jar of bees is applied to his buttocks. The story is ridiculous, the jokes border on the surreal, and if Coen weren’t so good at keeping a straight-faced narrative the story would collapse in the ruins of its own stupidity. 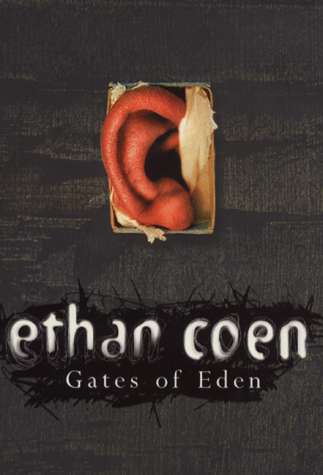 It’s difficult to do the book justice without giving away all the best jokes but some of the gags deserve a wider audience. A deaf investigator takes on a blind client who communicates through typing; as the client cannot see the typewriter his hands are wrongly placed and he informs the exasperated detective that “U tgubj nt mufe us cgeatubg ub ne” before handing over a picture of his missing wife that turns out to be a photograph of a polar expedition. As the scene gets increasingly fraught it becomes more surreal and hilarious; other stories in the collection are even worse. Some of the tales introduce femme fatales with typically demented results; others parody British spy novels and most of the stories include violence that, like the violence in Fargo, walks the line between horror and farce. The whole book barrels along at a pace that barely allows you time to recover between laughing fits.

Gates Of Eden is stupid, derivative, utterly pointless and completely devoid of any literary merit whatsoever. As soon as I finish this review I’m going to read it again.