Citron Press has, perhaps unfairly, been derided as a vanity publisher. Billing itself as a writers’ collective and endorsed by none other than Martin Amis, the company certainly charge prospective authors considerably less than the average vanity company and do seem to make an effort to market their books. It’s difficult to be objective, though, when you know that the author of a book had to pay to get it published in the first place.

So would Farce Hole have been published elsewhere? Possibly, although the awful title would have been the first casualty of any self-respecting blue pencil. Billing itself as a comedy set in the world of magazine publishing, the novel follows a vain, arrogant magazine editor as she sits in the afterlife and relives the days leading up to her demise. The characters are drawn from central casting: the deeply pretentious and egotistical editor (the narrator, Vicki), the obligatory flamboyant homosexual, power-crazed wannabes and aspiring social climbers. The result is Absolutely Fabulous with more sex and swearing.

Part of the problem with the novel is that Barrister-turned-writer Olliver (what is it about lawyers writing books?) has used stock characters whom he then exaggerates for comic effect. The difficulty with comic exaggeration, though, is that it’s a tool which has to be used carefully for fear of removing any trace of humanity and turning into Tom Sharpe. If the characters have no humanity then it becomes increasingly difficult for the reader to identify with them or to care about the outcome of the story. It’s a trap Farce Hole hasn’t so much fallen into as jumped on from the top of the Empire State Building – by lampooning the fashion industry so mercilessly Olliver has created a world where each and every character is self-obsessed, shallow and avaricious. Rather than get involved in the narrative you find yourself tuning in and out, waiting for the next bit of gratuitous sex. 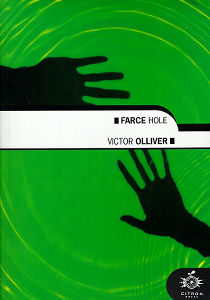 The whole thing trundles along towards a denoument which calls forth more stock characters from the Big Box of British Farce – corrupt mayors, wizened fortune tellers and leery locals. Inevitably there’s a twist and the novel draws to a close with the narrator briefly accepting that the world does not revolve around her after all.

Victor Olliver is clearly intelligent and, if he’d toned down the farcical elements just one notch, his debut could well have turned out to be a biting satire on the fashion industry, a British rival to Brett Easton Ellis’ Glamorama. Like his characters, though, Olliver is trying too damn hard to impress.