It’s tempting to see Richard Dawkins as the Jeremy Clarkson of Darwinism, chainsmoking Marlboros and cackling as he writes in his diary: “To-do on Monday: wind up Creationists”. Although the image is perhaps a little far-fetched, it’s safe to say that Climbing Mount Improbable is unlikely to top the recommended reading lists of many Christian fundamentalists.

It’s bizarre that so long after “The Voyage Of The Beagle” a protracted essay on natural selection can still cause controversy, particularly when Dawkins’ prose communicates a distinct sense of wonder that if anything becomes more apparent as the book progresses. Mount Improbable is Dawkins’ metaphor for the evolution of complex structures like a bird’s wing or the human eye, which are frequently cited in an “up yours!” manner by Creationists. Evidently fancying a scrap, Dawkins takes on the challenge and attempts to show us that such seemingly improbable results reinforce rather than refute the arguments of Darwinian selection.

Even if you’re not taken by the evolutionary theories there’s still more than enough in the way of fascinating facts to keep you amused for hours – evolutionary biology is, after all, the science of sex and fighting. An early chapter discusses the sex life of spiders in great detail and provides some illuminating information – like the story of the spider which offers the female a wrapped parcel of food, then jumps her from behind as she’s otherwise distracted. It’s worth pointing out to any romantically challenged readers, however, that trying the same experiment with human beings and a mars bar tends to result in prison sentences. 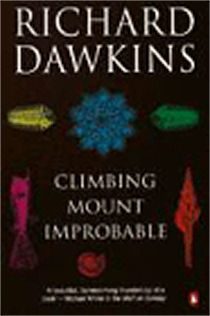 If there’s a flaw in Climbing Mount Improbable it’s that Dawkins is sometimes a bit too keen to dismiss conflicting opinions and occasionally undermines his argument with a fit of scholarly pique. In the earlier chapters of the book he seems a bit too credulous, eager to latch onto the slightest shred of “proof” no matter how flimsy: one early illustration shows the profile of John F. Kennedy in the shadow cast by a mountain and, although the accompanying explanation describes the human brain’s keenness to recognise faces, it looks suspiciously as if the shadow has been drawn in magic marker. Similarly a photograph of coco-de-mer is described as having an uncanny resemblance to “a woman’s loins” – a resemblance which even the most sexually frustrated reader will have some difficulty seeing. Descriptions such as these make you wonder more about the women Dawkins associates with than the scientific point he’s trying to make.

Unsurprisingly for a popular scientist, Dawkins is a bit of a geek who clearly loves his techno-toys. Within the first few pages he’s talking about using software to simulate evolution and then goes completely nuts, suggesting that the best way to simulate natural selection would be to make great big robots who could beat the crap out of each other. For purely scientific reasons, of course. As the book unfolds, however, the software becomes essential to Dawkins’ case, providing him with the opportunity to “breed” creatures on a VDU screen and simulate millions of years of evolution in a relatively short period of time. It’s a far from perfect model, though, and he admits direct intervention in the selection process to overcome the limitations of the software algorithms, a somewhat unscientific “end justifies the means” approach.

Overall, though, Climbing Mount Improbable presents a cogent and highly readable story, rich in detail and guaranteed to make your brain swell until you resemble one of the aliens in “Mars Attacks!”. Even the staunchest fundamentalist will find food for thought in the text as, far from delivering the killer blow to Creationism that Dawkins no doubt intends, the book’s focus on the mechanics of evolution could equally be used to prove that God can indeed be found in the details.