There’s always someone telling us that the novel is dead. And that is how it should be. As well as offering us the chance to laugh at the fools who parrot this announcement, it makes us ask, for the umpteenth time: what is the novel for, exactly? The question should not be answered without referring to a novel in particular. Each novel is unique. Or should be. We’ll come to that later.

One of the reasons why cultural commentators, such as the BBC’s Andrew Marr, proclaim the death of the novel is because novels have become irredeemably classifiable. Novels that break the rules seem to be so mannered, so distant from the world we call real, that they demand to be classified as frivolous and elitist. Most of them are. And they seem all the more mannered and distant because the classifiable novel has become so refined, so intimate with the deceit of language, that we do not see them for the very odd objects they really are. Instead, by effacing themselves in a whole raft of technique, they enable the reader-as-consumer to bypass any doubts and leap straight into what is desired: distraction.

The literary novel, on the other hand, is definitively unclassifiable. Or should be. Hence the regular asking of the question: "Why are detective stories/ thrillers/horror novels/science fictions ignored when it comes to literary prizes?" The accusation that always follows is that these prizes are for highbrow snobs. In a recent radio interview, the question and accusation was repeated by horror novel writer (and TV presenter) Muriel Gray. As I listened in a departure lounge filled with airport-novel clutching passengers, I wanted to shout: THERE IS GOOD REASON! But I kept my dignity. Until now.

The reason is because the novel has to reinvent itself, each and every time. When a reinvention is achieved, it deserves recognition. One cannot use the crutch of a genre, the alibi of a genre, and expect to receive an award specifically intended for a unique achievement. Muriel Gray’s horror novels have received critical acclaim by those who know about such things; Stephen King no less. Worth checking out then. But you can’t have it both ways Muriel.

In the same interview Gray says she hates writing but loves having written. I suggest this maybe due to her self-imprisonment in genre. Real fiction is a form of exploring oneself and the world, perhaps finding oneself and the world, perhaps finding a passage through darkness (forgive the Romantic clichés). Maybe Muriel should try it sometime. She might even win the Booker Prize. Or maybe she should stick with horror. In recent years, the Booker has tried to appeal to a wider audience and so last year the shortlist was made up entirely of genre fiction. Or was it the year before? Who cares? 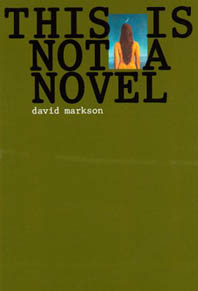 David Markson’s novels will never be soiled by the attentions of the Booker Prize committee. He would be eliminated early on because of his reputation as an innovator. Anyway, as an American, he is ineligible. His earlier novel Wittgenstein’s Mistress is about the last person on Earth, although this is not apparent to the innocent reader. It consists of short paragraphs of statements and self-questioning by a lone woman. Actually, I haven’t read it, or any other of his novels. In fact, I’ve never seen any of them in a shop or a library. But I have now read This Is Not A Novel. It is a 190-page bricolage of quotations, anecdotes and opinions on artists, writers, composers, philosophers and various other high art types. Here is a random sample:

"Timor mortis conturbat me.
The fear of death distresses me.

And what is the use of a book, thought Alice, without pictures or conversations?

There is no such thing as a great movie. A Rembrandt is great. Mozart chamber music. Said Marlon Brando.

Eliot died of emphysema in conjunction with a damaged heart.

Pound died of a blocked intestine."

The final two entries here constitute the main bulk of the whole book: reports on how famous artists and thinkers died. Each page returns to this theme. As you might expect, it has a strong melancholy edge. I understand that Markson is elderly and unwell, so he has good reason to dwell on such matters. Yet to describe this book as a long lament about imminent demise is to miss the overall effect. It is something wholly other than melancholy.

At the beginning, the narrator, called simply "Writer", says he "is pretty much tempted to quit writing. Writer is weary unto death of making up stories." So instead he presents this trance-like list. Some way into the book Writer intervenes to suggest it is a prose equivalent of Eliot’s The Wasteland. And for sure it is like that poem, or a piece of music, specifically a fugue (that is, "a polyphonic composition constructed on one or more short themes which are harmonised according to the laws of counterpoint" – OED). Very soon, the reader is unable to escape the special rhythm of anecdotes that at first seem to have absolutely nothing to do with literature. Yet in the end, and for the reason that it has nothing to do with literature, it becomes clear that it has everything to do with literature. After putting the book down, one is compelled to pick it up again, not to find out what happens next, but to re-enter the intoxicating rhythm.

It is significant that Markson tends to refer to highbrow artists. The contrast with their more famous achievements is relentlessly brought to the fore. We can read this sort of thing all the time about popular artistes on sites such as popbitch.com, but this contributes only to our enjoyment of pop culture. It doesn’t shock and resonate. In This Is Not A Novel, we can’t escape the fact that all great art is produced by people who die, while the work survives. A commonplace, of course, but a brute fact that modern artists confront on a daily basis. They ask, what is the point? It leads to frustration. It leads to despair. It leads to Gray’s contempt for the modern novel. Some might think Markson is joining in with this contempt; ridiculing the pretension of high art. However, the endless unspoken contrast of absurdity and death with Writer’s evident fascination with the works of art referred to, only re-emphasises our uncertainty about what art is and what it does to us.

One thing is for sure though: the artistic and intellectual achievements of the centuries did not come about by repeating what has gone before. Writer writes:

"Writer has actually written some relatively traditional novels. Why is he spending his time doing this sort of thing? That’s why."

Essentially, if pretentiously, genre fiction denies death. The reader is cocooned from the world we call real by sticking to the conventions of character and plot, or at least by assuming that they constitute what we call "the novel". Genre fiction does not question itself because it is the means to other ends. It may help us through the day, but not our lives. This Is Not A Novel is such for good reason. How Markson’s book helps is something I have been asking myself. And the answer, as I have just experienced, is in the asking. But maybe this is not an answer.