If there was any justice in the world, it would be illegal to own Simply Red albums and Half Man Half Biscuit would be worshipped as gods. Unfortunately, the vagaries of the music business mean that the band who brought us the immortal lyric “God, I could murder a Cadbury’s Flake, but then you wouldn’t let me into heaven / or maybe you would, ’cause their adverts promote oral sex” (“Dickie Davies’ Eyes”) are unlikely to become as big as Boyzone. It’s a shame because, as Trouble Over Bridgwater demonstrates, Half Man Half Biscuit are one of the funniest bands Britain has ever produced.

Like every other HMHB record, the band’s millionth album (ok, eighth) sounds like it was recorded in a shed and misses its targets as often as it hits them; nevertheless, there are enough gems on the CD to make it an essential purchase. The usual mix of punky guitars and deadpan vocals is present and, to our ears, the standout track is Irk The Purists (“Irk the purists, irk the purists, irk the purists, it’s a right good laugh”). The song uses the tune of Agadoo to devastating effect: “Hüsker Dü-Dü-Dü, Captain Beefheart, ELO”. It’s a good indication of the rest of the album, too. If you think slagging off the whiny indier-than-thou brigade is a great way to spend an evening, Trouble Over Bridgwater will have you in tears. 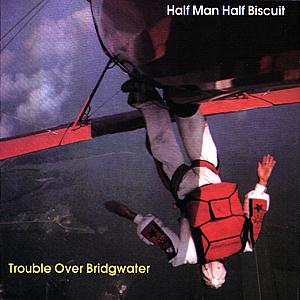 The band’s strength has always been their willingness to wring every last drop of humour from a stupid idea, and “The Ballad Of Climie Fisher” is a classic example of this. Revealing the answer to the not very frequently-asked question, “whatever happened to eighties popsters Climie Fisher?”, the song recounts how the clean-cut stars went into the gravel business, with awful consequences. Similarly, “Used To Be In Evil Gazebo” takes gleeful aim at gloomy indie bands, with the genius chorus “I used to be in a mental hospital but I don’t like to talk about it”. Other songs are worthwhile just for their song titles: who can resist “Twenty Four Hour Garage People” or “Look Dad No Tunes”?

If your listening tastes are more Celine than Clinic, Madonna than Mogwai, you’ll find Trouble Over Bridgwater goes right over your head – even we found some of the pop culture references entirely baffling. If, on the other hand, you’ve an encyclopaedic knowledge of indie music and regularly trounce all-comers at the local pop quiz, this album is as essential as breathing.