‘nothing happening at all … not at all … Then one fine day she turned on a New York station, she couldn’t believe what she heard at all … she started dancing to that fine fine music, her life was saved by rock’n’roll.’

Suburban Dublin in the early eighties offered little in the way of such aesthetic salvation to a fourteen-year-old geek with nothing in his record collection but a borrowed copy of ChangesOneBowie and the vague sense that there must be more to pop than the soggy snap and crackle of the likes of Kajagoogoo. It was only a couple of years since I’d been jammed against the playground wall by an angry red clot of Harrington jackets posing the enigmatic question: ‘you a mod or a ska?’, and the only possible answer (‘er…I’m a human being’) was wearing thin in the face of the stern judgments of teenage fandom.

By 1983, I dimly discerned that the culture had shifted and I was being asked to choose between the receding global blondness of The Police and the mulleted pomp of local heroes U2, neither of which appealed to a sensibility now lost in wonderment at the lyrics of ‘(John) I’m Only Dancing’.

I did the only thing I could: I flew to extremes, and soon found myself mounting a lofty defence of a recent Top of the Pops shocker. ‘Of course Boy George isn’t gay’, I whined, but the Harringtons had turned to donkey jackets and once more all was lost. Then one fine day, as Lou might say, I picked up a music paper and couldn’t believe what I read at all. My life, oddly enough, was saved by rock’n’roll critics.

In the inky pages of the NME I discovered not only The Velvet Underground, Joy Division, Cabaret Voltaire and The Jesus and Mary Chain, but Burroughs, Ballard, Fassbinder, Roeg, Barthes, Benjamin and Foucault: the whole constellation, as I imagined, of a post-punk rewriting of post-war European and American culture.

From the bleakness of the early Thatcher years, a number of critics had furnished a cultural heritage that might mean something like these things might have meant when this sort of thing meant something. What I caught, or rather what caught me, by utter accident, was the tail end of that brief moment in the history of pop-cultural commentary when it still seemed not only that pop music mattered, but those who knew it mattered also mattered.

If the best criticism teaches you how to think, not what to think about, so it was the prose of writers on the NME that changed everything in my adolescent universe. More than the revelation that there was a whole world of dark and glistening music out there, it was the writing of two individuals – Ian Penman and Paul Morley – that seemed to promise the bright blue world. Compared to the enthusiastic but stunted prose of many of their colleagues, the writing of Morley and Penman seemed impossibly baroque: these critics wrote not with the knowing tone of insider dealing that still dogs most rock writing, but with a vertiginous distance that demanded all manner of stylistic feints and quirks, a writing of endless qualifications (and dizzy parentheses). Almost two decades later, Penman is still this country’s most perceptive, stylish and downright serious music critic. 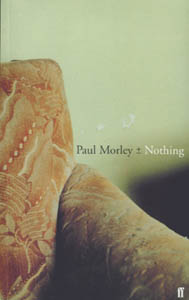 Paul Morley went on, famously, to found the Art of Noise and front the early Late Show (and also, infamously, to plot the brief trajectory of Frankie Goes to Hollywood alongside Trevor Horn). In 1986 Faber published a collection of his writing for the NME entitled Ask: The Chatter of Pop. Now comes his second book, Nothing, a memoir of sorts about the effect of his father’s suicide in 1977.

Morley’s father killed himself around the time that his son became a rock critic, and somehow these events got mixed up in the mature Morley’s head: he wonders early in the book whether his father died before or after Elvis and Marc Bolan. He knows it was before the suicide of Ian Curtis, singer with Joy Division and the only corpse that Morley has seen in his life. Morley’s investigation of his father’s death, the chronic depression that led to it after crippling most of his adult life, and the effects on his children, makes for a moving story, told with Morley’s characteristic linguistic and narrative oddness. The playfulness is not all that far removed from the smart aleck pyrotechnics of the 80s pop critic, but rather than detracting from the seriousness of the story, it turns out to be the most fitting way to tell a tale of gaps, dreams and failures of memory and nerve.

The story begins with a haunting description of Ian Curtis’s body, and throughout the book it is music that seems to have provided the only stable reference point (precisely because of its instability, its flash and dare) in Morley’s adolescent world. The book concludes with a discography of music Morley says he listened to while writing it: a list perhaps of all the difficult, dizzying, frightening and comforting sounds that helped him steer a path into adulthood: including Nick Drake, Tim Buckley, Bolan, Eno, Magazine, The Associates and, of course, Joy Division.

Lester Bangs’s father was burned to death at the age of forty-one, leaving the young Lester to suburbia and his growing enthusiasm for the writings of the Beats and the music of Mingus and Coltrane. As a teenager, Bangs resolved to become a writer, became addicted to alcohol and Romilar cough syrup, and discovered rock’n’roll. In 1968 he wrote a scabrous review of the latest MC5 record, concentrating all his disappointment into a missive to Rolling Stone with the message ‘you’d better print this or give me the reason why!’ The magazine obliged and Bangs joined the ranks of the writers who dominated rock criticism in the late sixties and seventies.

Alongside Nick Tosches, Richard Meltzer, Greil Marcus (and avuncular elders like Robert Christgau), Bangs fashioned a prose that would do justice to the rage and blur of the music, a style as much indebted to the sounds of free jazz and the Velvets as it was to his heroes, Burroughs and Kerouac. In the decades before the advent of MTV, record companies needed colourful figures like Bangs to lend some credibility to their increasingly desiccated charges, and it was just too bad if some of them bit the hand that fed (and watered, and much else), filing pieces with titles like ‘James Taylor Marked for Death’ and gleefully exposing the quadruple-album hubris of the likes of Chicago and Jethro Tull.

When punk arrived to evict these preposterous characters, Bangs understandably embraced a movement he had, after all, identified some years earlier with his championing of the Velvet Underground, Stooges and New York Dolls. Within a couple of years, however, he was disillusioned at the nihilism and racism of the New York punk scene, reserving his true admiration for the dub-inflected depths of John Lydon’s Public Image Ltd.

By the early eighties, Bangs was a legendary figure among musicians, journalists and readers of music papers on both sides of the Atlantic, but his efforts to adjust to the shiny new pop world of that decade left him tired and longing to do some ‘real’ writing. Bangs never wrote the novel he’d dreamt of as a teenager. On 30 April 1982, he bought a copy of the Human League’s Dare for his girlfriend, got home, put on the record, lay down on the sofa and died, the victim of two decades of alcoholism and drug abuse. He was thirty-three years old.

Jim De Rogatis’s Let It Blurt: The Life and Times of Lester Bangs does a competent enough job of telling this story in all its messy and, as the book goes on, dreadfully predictable detail. De Rogatis fails, oddly (or perhaps not so oddly, given his own clunky prose), to catch much of the idiot glee or the vengeful fury that made Bangs such an exciting writer. Lester Bangs’s writing was idiotic in the original sense of that word: it was the language of an outsider, an amateur, a nobody. 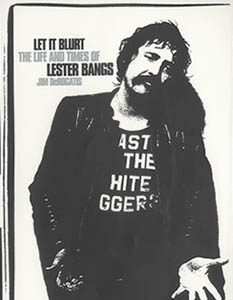 Ultimately, Bangs, like Morley, wrote from the suburbs: from a place where pop music mattered more than it did anywhere else. Most rock writers are so keen to seem clued-up and included that they end up writing from the most isolated and enervated vantage points: be it the airless studiousness of Greil Marcus or the backstage anecdotage of a Keefed-up jagger like Nick Kent. Bangs may have partied with the worst and even ‘jammed’ with the J. Geils Band (typing his concert review live on-stage), but a glance at the photos here tells a different, more solitary, story.

Whether lined up at CBGB with Patti Smith, Lou Reed and John Cale, or dining out with Slade (imagine!), Bangs looks more out of it than anyone: a chubby grown-up adolescent ready to nod out and back into solitary bedroom worship rather than expense-account excess. It’s no wonder that in his best interview, the marvellously-titled ‘Let Us Now Praise Famous Death Dwarves, or How I Slugged It Out with Lou Reed and Stayed Awake’, Bangs and his comically dull interviewee seem to be speaking different languages. Reed is all technical detail (talking drugs or guitar sounds, Reed affects a blankly statistical approach to that ‘fine, fine music’), while Bangs is clearly coming from somewhere entirely else, confronting Lou with his own legend, which turns out to be Lester’s own fractured teenage dream, and concluding ‘I never met a hero I didn’t like. But then, I never met a hero. But then, maybe I wasn’t looking for one.’

In 1984, Paul Morley wrote: ‘what do people get out of Phil Collins? Just a complete and beautiful lack of intrigue?’ It’s the kind of question that, oddly enough, given their very different styles and reputations, could have been asked by Lester Bangs (had he lived to see the resistible rise of a man who must have been, somewhere, somebody’s hero).

On the evidence of these two books, both writers seem to have made out of the fear and boredom of their teenage years, an astonishing vision of what pop music could mean in the absence of much other meaning, and an awfully lucid sense of just how mean, reasonable and downright competent are the expectations and reactions that most people direct toward music (or, for that matter, just about any other art form).

The philosopher Hegel once wrote that criticism was ‘a self-annihilating nothing’, which seems as good a description as any of the effort to capture in prose the fascination of something as evanescent as a three-minute pop song (Bangs’ more pointed phrase was ‘a reasonable guide to horrible noise’). If adolescence is a time for taking things far too seriously, the writing of Lester Bangs and Paul Morley teaches us (if that’s not too serious a way to describe writers who, after all, have written little but record reviews) that, if we’re lucky, the seriousness stays with us in all kinds of unexpected ways, and perhaps nowhere so much as in the way we hear (or fail to hear) words and music conspiring to infiltrate our psychic suburbs.

Jim De Rogatis, Let It Blurt: The Life and Times of Lester Bangs

The best of Ian Penman appears in Vital Signs