Rebel Inc was started in 1992 with the intention of promoting “a new wave of young urban Scottish writers who were kicking back against the literary mainstream”. Laura Hird first appeared on their “Children Of Albion Rovers” collection and Nail And Other Stories is her first short story collection for the publisher.

The opening “Nail” starts promisingly enough, the tale of a beauty-obsessed style queen who develops a boil on her finger, but Hird’s hatred for the character is too transparent for the story to sustain 30-odd pages. Similarly the beautifully-drawn characterisation of “Routes” stops dead as Hird clearly runs out of ideas for the story – a shame, as her monologue from the persona of a young male “schemie” is particularly empathetic. “The Hard Sell” is simply a waste of paper, a short tale of a drunken car-park coupling which makes up in detail for what it lacks in plot or insight.

While Hird clearly has a talent for characterisation – the people in these stories jump vividly from the page – it’s a shame that she then buries that talent in the usual semi-pornographic nonsense we’ve come to expect from so many of Rebel Inc’s writers. It’s not so much lack of talent as lack of ideas; promising stories are depthcharged for facile “all men are bastards” endings, particularly in the closing “There Was A Soldier” which makes the tired connection between soldiers and violence towards women. The tale of a squaddie who sleeps with a decomposing corpse and then buries it on Culloden Moor, any suspense or shock is abandoned in favour of political comment worthy of Ben Elton: the stench of burning flesh is “a familiar and evocative smell that he’d no doubt encounter again as soon as he was on tour with a battalion in Londonderry at the end of the month”. 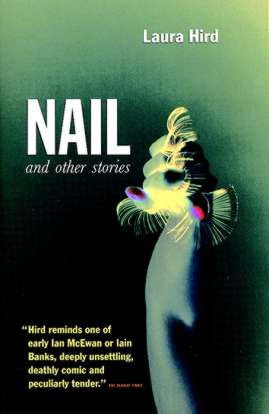 “The Initiation” is the only real success in the collection. The story of two teenage girls and their manipulation of a naÃ¯ve outcast is shocking, powerful and for the first time in the book showcases Hird actually using her writing ability to the full. It’s all the more marked as the following “Tillycoultry / Anywhere” returns once more to the territory of downtrodden women and bastard men, in this case the ongoing attempts of a husband to persuade his wife to try partner-swapping. Although the story manages to show “swinging” in its tawdry reality, Hird’s own thoughts are too prominent and overpower the character, reducing her to a mouthpiece for the author’s heavy-handed conclusion.

The most frustrating story in the collection is “I am gone”, narrated by the spirit of a recently-dead woman as she watches her girlfriend grieving. Hird has a great deal of fun with the idea of a spirit who can see but who can’t affect the world around her, but all too predictably it once again descends into cheap voyeurism. Although the early sections of the story show a writer with genuine talent and a fierce imagination, the ending is an anti-climax in more ways than one.

Laura Hird is a hugely talented writer who has the potential to produce a masterpiece. Nail And Other Stories isn’t it.