Access is always a problem for the would-be biographer and the phrase “unauthorised biography” is usually a sign of a cut-and-paste job written by a bored hack who has little or no affection for the band. The notoriously private Radiohead suffer more than most from this syndrome and a number of piss-poor biographies have hit the shelves since the phenomenal success of OK Computer. [continued]

From A Great Height suffers from the usual lack of access – somehow it’s hard to imagine Radiohead subjecting themselves to yet more attention after the less-than-flattering Meeting People Is Easy documentary – but Hale certainly cannot be accused of disinterest. In the opening parts of the book he proclaims Radiohead to be “musical geniuses” and it’s clear throughout the biography that he’s a huge fan. Relying almost entirely on a few published Radiohead interviews and the odd chat with journalists who have interviewed the band, Hale has produced a surprisingly well-researched history which is particularly good in its opening chapters.

The book is exhaustively researched and, unusually for a rock biography, gives credit to the many excellent Web sites created by Radiohead fans – presumably some of the sites served as a source of research material for From A Great Height. This research has eliminated most of the factual errors that plague unauthorised biographies and Hale’s lively prose style keeps everything moving at a decent pace.

Radiohead are still a relatively young band whose story can largely be derived from press interviews and fan Web sites. For non-fans, however, Hale’s obvious love of the band’s music means that the overall tone of the story may be overly reverential. Early insights into Thom Yorke’s character don’t re-appear in the later sections of the book – something of a missed opportunity as the contrast between the fiercely ambitious Yorke of the 1980s / early 1990s and the notoriously press-shy singer of today is startling. The fierce press criticism and intra-band friction of the The Bends tour is almost glossed over, highlighting the problems of writing a biography without the band’s full co-operation. Thom’s anger and sociopathy in particular are only mentioned in passing as Hale presents an almost unfailingly upbeat picture of a band he clearly believes were destined for greatness from day one. 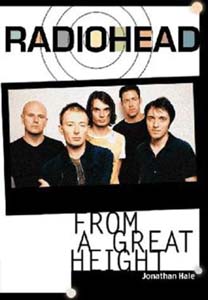 For fans, the book is full of information on recording sessions, tours and other rock trivia whilst the obligatory discography is extensive and well-annotated. As a primer for new Radiohead fans it’s very effective although a great deal of the information contained in the book’s pages are freely available on the Internet.

The non-involvement of the band poses problems again and again – the disillusionment with touring OK Computer which was so evident in the Meeting People Is Easy video is hardly mentioned and Hale is often too keen to accept the band’s revisionist statements about their own history, dismissing the reports of the band hovering on the edge of splitting up whilst touring The Bends and attempting to portray Yorke as a happy, gregarious 24-hour party person. The intriguing relationship between Yorke and Michael Stipe of REM, too, is never discussed beyond the two frontmen’s press quotes and the potentially-illuminating working relationship between Yorke and artist Stanley Donwood is reduced to a few paragraphs.

From A Great Height is ultimately a flawed attempt to record the history of Radiohead to date. Hale is perhaps too enamoured of the band to be able to maintain the level of critical distance necessary to be fully objective, and the lack of access to the band is evident in almost every chapter. It’s not a bad biography by any means and for fans who are unaware of Radiohead’s history it’s an excellent introduction; for people who want to know what makes the band tick, however, it’s a frustrating read which provides few insights. Until Radiohead agree to collaborate with a biographer, though, From A Great Height is as good as it gets.