No matter where you go on this small planet of ours, you will encounter ‘Garland’s Law.’ That is, for every 10 people under the age of thirty that you meet, approximately 3.33 per cent of them will have read or be reading Alex Garland’s first novel, The Beach. Actually, I just made that up, and it already seems too conservative. I have recently been staying in two hostels in the States. In the first dorm room a Danish girl ripped through the book in about three days; her friend had just finished it. In the second, an Oxford University student was a quarter way through, and her travelling companion planned to read it next. On buses in India, on the subway in New York, in international departure lounges everywhere, the distinctive yellow spine of The Beach is truly ubiquitous. In case this is still not sounding familiar, a film adaptation of the book is currently in postproduction and due to hit our screens in spring 2000. It is directed by Danny Boyle of Trainspotting fame and it stars Leonardo Di Caprio. Honestly, could it be any hotter?

In case you are one of the, oooh, seven people left in Britain who are not familiar with the plot, here is a brief summary for you. Richard, a twenty something Brit, arrives on Thailand’s famous Khao San Road — the first stop on the well-trodden backpacker’s trail. On his first night, the man in the room next to him slits his wrists and leaves Richard with a map to a mysterious beach. Along with a French couple, Richard sets out to find this supposed paradise, where a select community are trying to create their own version of utopia. When they finally arrive, having survived a harrowing swim and some AK-47 toting marijuana farmers, the new visitors are welcomed rather uneasily. Tensions arise, not least within Richard’s psyche. You can guess the rest – the book has been described as What I Did On My Holidays meets Apocalypse Now meets Lord Of The Flies and those references are more than just a pat summery. The Beach is essentially a gripping tale of a journey into the heart of darkness, but one that is nicely wrapped up in knowing pop cultural references and located in a somewhat trendy travel destination. It is not hard to see why it was so swiftly optioned for a Hollywood blockbuster.

So, you may be thinking, what of the author of this mega hit novel? And why, thus far into an interview write up, have I not mentioned his best selling follow up, The Tesseract? Why indeed. More of that later – for now, meet Alex Garland. Some biographical details: He was born in 1970, son of the well-known and respected political cartoonist, Nick Garland. With a resolutely middle-class and intellectual background, he graduated from Manchester University with a degree in History of Art, and was planning on following in a his fathers footsteps before he realized: “There aren’t many openings for a cartoonist.” Instead, he turned his attention to fiction, and started writing The Beach when he was just 23, drawing on his many experiences of travelling (he first went to India when he was 17, on a school trip, and he now makes several visits to South East Asia per year.)

The Beach was brought out in 1996, with no big promotional push from the publishers, yet within a year, it was a best seller. Rave reviews everywhere from The Mail On Sunday to Maxim magazine certainly did no harm, but predominantly it was word of mouth that made The Beach a success. Only three years after he first put pen to paper, Garland was being heralded as the new voice of ‘Generation X’ and making Vogue’s most eligible bachelors list. At such a young age, and on the back of a debut novel, this was a rather heavy weight to bear.

Bearing this in mind, his media shy and somewhat guarded manner are understandable. Fortunately, in keeping with the ultra-modernism of the book, Garland himself has a very low-key approach to his what he does. “Writing certainly wasn’t something I thought I wanted to do as a kid. It was something I chanced upon. And, in a way, I don’t think you could say I chose it as my profession. I gave it a try and it worked out, and I enjoy it and that’s it.” He is similarly down to earth about his situation. Despite being one of the most in-demand authors this side of Nick Hornby, he harbours no illusions.

“There is a business side to writing and if you don’t sell books then publishers won’t print them. You’re only as hot as your last novel. I think you can reach a point when you’re not as good as your last novel, you may have written one or even two bad books in a row, and the publishers will hang onto you. But you need to have proved yourself in a long term way before that and I certainly haven’t done that yet. I still feel like I’m doing an incredible bluffing trick and I’m going to get caught out.” 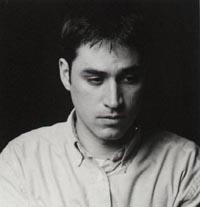 There are those that would agree with this self-effacing appraisal. Reaction to Garland’s second book The Tesseract has been mixed. There were some scathing reviews. “A pointlessly elaborate portrait of disparate lives coming together” was one description. “Tedious, convoluted, pompous” was another. Yet others have heaped praise on the book (Michiko Kakutani in The New York Times said it felt like “a Quentin Tarantino or John Woo movie seasoned with some Graham Greene.”)

It is certainly a more mature and reflexive study than the fast and furious The Beach although personally I find myself in with one foot in both camps; I was not totally convinced by the characters in The Tesseract. The use of film references and American slang works perfectly in The Beach, when all the central characters are European, but somehow I can’t quite imagine the rural and local characters in The Tesseract coming out with lines like: “You’ll be brained by a coconut.”

Set in the Philippines, the story interweaves three narratives. Sean, an Englishman, is on the run from two Philippino mafia henchmen. As they pursue him, he stumbles into the kitchen of Rosa, a Philippino village girl now living with her husband and children in Manila. Cente, a thirteen year-old street child, witnesses the encounter. “Basically what you have in the book is a group of people who can’t make sense of everything that’s around them. And I think I use that as an anti-religious argument,” Garland explains. ” It’s sort of theistic. It’s not even fate. The point is, sometimes things just happen to people and it’s not for any cosmic or religious reasons. Sometimes things just happen that way.”

As the above quote indicates, Garland has a knack for seeing and expressing things in a very understandable was, and this is no doubt part of his appeal to a generation turned off by so called ‘classic’ yet impenetratable authors. “I know exactly what you mean,” Garland says. “I think if you asked the average literary editor whether they thought my work was equitable with Salman Rushdie’s, they would say no. Well, that’s not something that bothers me very much and I doubt very much that it bothers Salman Rushdie.” Garland’s approach to the actual nuts and bolts of writing is similarly non-traditional. 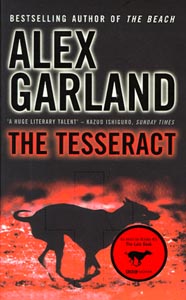 “For The Tesseract, I didn’t do any research,” he confesses. ” I’ve spent more time in The Philippines than anywhere else so there was a certain kind of background detail that I didn’t really have to research. But in terms of putting yourself into the heads of different characters, I’m not really fazed by this culture thing. As long as people have enough money to live and they are not starving to death, then basically people’s preoccupations tend to be the same wherever you go. They are worried about their jobs; they are worried about whether their wife or husband is happy, or how their kids are doing. I think I approached The Tesseract thinking the culture is quite cosmetic.”

This may seem like a strange attitude for a man who has made so much out of basing his work in exotic locations, yet there is a sense that Garland uses South East Asia as only as a backdrop. What he is really interested in is the human story, the development and exploration of different mental states. The way in which human beings make sense of the world.

Having said this, there is no doubt that at least part of the reason for his success lies his depiction of Europeans abroad, which coincided perfectly with the explosion in the backpacking market. Locations like Thailand and The Philippines are now accessible and extremely desirable places to visit. Garland sums up this shift in global tourism when he recollects his first travelling experience. “My memory is basically that I had a good time, and the main thing that I learnt was how easy it is. If you get the money together and a ticket, you can pretty much go anywhere you want to go. I suppose I imagine that there was some sort of invisible barrier that stops you from going to these places, but the only real thing that stops you is cash.”

Considering his position, lack of money should be no impediment to future trips. But for now, Alex Garland is keeping his feet firmly on the ground. “My philosophy of life is.just enjoying it, I think. I’ve started work on another book but at the moment I’m mostly working on a screenplay with a bunch of mates; we’re just trying to see if we can get it together. It’s half set in Chile and half in Russia and based around a story which links the two countries.” Now, who do you think will be playing the central role? You know it will happen. It’s just a matter of time.