Bristolian born and bred, 40-year-old Julian Murphy studied Design for Print at Brunel College. His acclaimed fetish art, which he describes as “sciperepics”, transforms everyday household appliances into extraordinary objects of desire. Critics have compared Julianâ€™s work to that of Escher and Giger, and it has been featured widely in the fetish press and beyond.

“Being surprised by art is a genuine rarity these days,” said Design Week, “but judging by the facial expressions of those shown this book itâ€™s a trick Murphy has pulled off.”

You werenâ€™t involved in the fetish scene when you started drawing, so what provided you with initial inspiration?

The initial inspiration came when, as a designer, I used to design greetings cards for companies such as Athena back in the mid ’80s. I always felt the ideas were too strong for such a flippant product, and they had short shelf – or should I say mantlepiece â€“ life. My marriage broke down six years ago and with the lack of clients allowing me to really express my imagination to its full potential, this kind of amalgamated into my art. I also believe good ideas never date, and nor does sex if I come to think of it. Sexual imagery, especially these days, seems to lack any class or style. Why shouldn’t all consenting aspects of sexuality be treated in a classier manner? I just can’t stand cheap crap, or degradation. I guess in a nutshell I’ve always thought this way, about all of life. Sex is just a huge throbbing tool for my creativity.

Are you able to do the housework without becoming aroused?

Itâ€™s difficult, and I feel selfish keeping all that pleasure to myself. So to be a more generous individual, I let other people do it. Too much self-indulgent sexual fun on your own is a real wank. 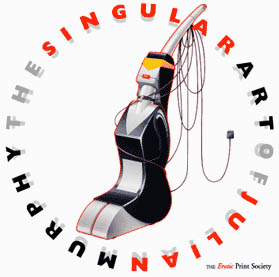 Have you ever been accused of â€˜objectifying womenâ€™ in your work? If so, how do you respond?

I have been accused of objectifying women, but my answer to that is quite simple: if people think that of me, I feel they are being sexist in their assumption that I’ve actually drawn a woman. How do they know itâ€™s not a woman dressed up as a man, or vice-versa? My work is androgynous – both or neither male or female. It is more to do with fetishism in its purest form, the objects of desire that surround sexuality. But rather than limit that to a pair of high heels or a corset, I’ve expanded the repertoire. I believe no one yet has really explored the total sexuality of inanimate objects. We see it in car design, or packaging. It’s all around us in a subconscious way.

A word of mine that means: knowledge (sci) from (per) repeating (rep) images (pics) – of which the shoe pattern is a perfect example. The word also reads backwards the same!

Has any household utensil defeated your attempts to eroticise it?

Have you ever been banned from hanging out in B&Q?

I have not yet been banned from B&Q, but being single at present, you do find yourself relying quite a lot on “do it yourself”. Given a chance, I’d be more of a “do it all” kind of a guy.

I hope people find my work amusing. Heaven forbid that sex should become a more serious a matter than the media presents it. I hope my work will create smiles, understandings, challenge the intellect, and maybe change the way people look at objects. A woman sent me a Swiss army knife she saw it at the airport, and it triggered her memory of my illustration. Itâ€™s great that I have an ability to pervert a personâ€™s feelings over a completely innocent icon.

Has your art made you fabulously wealthy?

Yes, but not in a financial way. If you are talking about soulful wealth, and an inner peace that only comes from being respected for who you really are, talents and failings, then, yes, I’m a rich bastard.

Who likes your stuff, anyway?

On my travels, or at book signings, the one thing that I most love is that about 70% of the people who show an interest in my work are women. Too often I hear that too much sexual imagery is very male orientated. Women seem to be attracted to my art because it does have an intellectual element, and is generally more cerebral. Without sounding sexist or anti my own sex, women are not just physical lovers. Someone once said, “a womanâ€™s most erogenous zone is her mind.” I’m inclined to agree.