Faster is a survey of the speed of modern life. Subtitled "The acceleration of just about everything", it’s a book which takes time out to stop and think about the breakneck pace at which we live our lives and the ramifications of doing so.

Unsurprisingly, technology has played a big part in increasing the speed at which we live. The caricature of the twentysomething dotcommer, guzzling espresso and working 18 hour days whilst continually plugged into the Net and their mobile phone, has already become a cliché because it’s so prevalent.

Even within normal office life, telecommunications has made the transfer of information easier and quicker and therefore the expectancy for the amount of work to be completed even higher. "Internet time" has become a standard phrase to denote manic progression and revisionism – what was happening last year is ancient history and what happens next week will probably be already out of date.

Similarly, we have all become adept at processing millions of bits of information simultaneously, multitasking between media and analysing it far faster than any of our forebears.

But it’s not just work that’s speeding up, with all the attendant stress and strain. The rise of convenience foods, of which the UK consumes far more than any other European country, indicates that we even relax at speed, forever trying to shave off a few seconds here and there so we can get something else done because there’s never enough time. 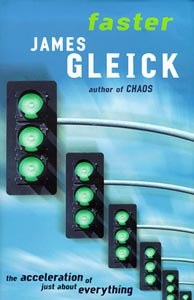 Gleick brings together a staggering range of time saving examples that covers virtually every aspect of our lives and skilfully weaves it together into an informal but informed overview. It’s the same trick which made Chaos, his exposition of chaos theory, an international best-seller. Gleick’s scientific background is evident in Faster’s measured, objective tone that prefers reporting the mindset of our time consumption rather than being critical of it.

That Gleick avoids hectoring the reader to slow down makes the book’s impact all the more pointed, especially when he indicates how timesaving techniques can become counter-productive. It makes our continual rushing around seem faintly ludicrous – or as one time-use report put it, "Sometimes American culture resembles one big stomped anthill".

Faster is a fascinating meditation about the modern definition of time that helps to define the age we live in. Gleick provides some much-needed context about the complexity of post-industrial life and its transformation by technology without collapsing it into a reductive argument about whether we are better or worse off than before. And of course, Faster is a short book, with chapters only a few pages long so you can fit it in to your hectic schedule.