Lewis Owens on the uphill path of Nikos Kazantzakis

Although many people may have heard of the novels Zorba the Greek and The Last Temptation of Christ, both of which have been adapted into films, it appears that few are so familiar with the name of the author, Nikos Kazantzakis. Although a national hero in his beloved homeland of Crete, Kazantzakis has failed to achieve the recognition in England that he so richly deserves. Novelist, playwright and journalist; disciple of Nietzsche, Bergson and Buddha; admirer of Christ and Lenin; praised by Thomas Mann, Albert Schweitzer and Albert Camus, his works are the external expression of an inward cry that seeks answers to the most profound questions of existence.

I first stumbled across the name Nikos Kazantzakis when I settled down to watch Martin Scorcese’s production of The Last Temptation of Christ, a film that has raised more eyebrows and received more complaints than any other film I can remember. However, unlike the majority of God-fearing viewers that recommended that Kazantzakis be anathematised from the human race, I did not find it offensive. On the contrary, although not particularly religious myself, I was profoundly attracted to this human Jesus, painfully struggling as he was between an acceptance of his own tragic, divine destiny and the temptation to bypass that suffering and live a normal, comfortable life, but consequently fail in his mission. Despite my discomfort with the American Dafoesque portrayal, I felt this to be a highly positive account of Christ, far more accessible and empathetic than that found in the Gospels.

Such an introduction to the powerful thought of Kazantzakis led me to track down more of his works. In particular, I became (and still am) fascinated by his aphoristic work The Saviors of God: Spiritual Exercises, which captures the essence of his philosophical ideas. A highly complex and difficult work upon first reading, I was aware of the accusations of nihilism and pessimism that had greeted its initial publication in Greece in 1927. However, I could not concur with the supposed negative ending of the work when all that went before seemed so illuminating and positive. I was intrigued. I sensed a new and refreshing approach to the relationship between matter and spirit and the ultimate question of God. I wanted to unravel all the layers of this enigmatic thought and so I decided to make an examination of the philosophical thought of Nikos Kazantzakis the subject of my doctoral research. Last year, this research took me to Iraklion, the birthplace of Kazantzakis, where I engaged myself with studying his personal library, housed in the Historical Museum of Crete, which is a fitting memorial to his life and work.

He was born in Iraklion in 1883 and studied in Athens before moving to Paris to study under the influential French philosopher Henri Bergson. It was in Paris that he nurtured his love for Nietzsche and soon afterwards Buddha. As well as his interest in philosophy and dramatic works, his journalistic commitments led him to compose travel-books about his visits to Italy, Spain, Russia, Japan, China and England. His magnum opus, translated as The Odyssey: A Modern Sequel consists of a monumental 33,333 verses and was completed in 1938. The latter part of his life saw his concentration focus primarily upon the composition of novels, most notably the works translated as Zorba the Greek, Freedom and Death and, of course, The Last Temptation of Christ, which was placed on the Roman Catholic Index of Forbidden Books by the Pope in 1954. Due primarily to the widespread condemnation of the book, his body was refused permission to lie in state in Athens after his death, before being taken to Crete. His humble grave overlooks his beloved Iraklion. 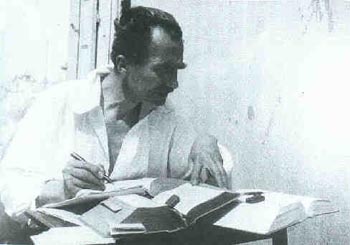 His work was highly regarded by many eminent writers of the time, including Albert Camus who was eager to find a theatre to stage Kazantzakis’ play Melissa when the two met in Paris during 1947. By this time, Camus was highly respected as an emerging young writer, already author of the acclaimed L’Etranger (The Outsider), as well as achieving notoriety as a journalist writing largely about his native Algeria. Camus used his novels as the channel for his philosophy of the absurd, which he saw as constituted by the meeting of the human mind’s desire for understanding, coherence and unity with the unreasonable silent response that was offered by the universe. In his essay The Myth of Sisyphus (1939), Camus had attempted to find a meaning to life when one accepted the renunciation of the existence of God and eternal values.

In his interpretation of the myth, in which Sisyphus is condemned to eternally roll a rock up a hill that no sooner reaches the top rolls down to the other side, Camus asserts that the hero provides a way to proceed beyond the paralysis of nihilism. As Sisyphus is conscious of the futility and hence absurdity of his action, he is able to transcend the despair that might easily have followed. For Sisyphus, the value in life is to be found not in its inherent meaning, but in one’s attitude towards it. This attitude is one of revolt, the refusal to be paralysed by the consciousness of the absurdity of our existence. For Camus, recognition of the absurdity of life, which entails the realisation that all actions are ultimately annulled by death, that “supreme abuse” , enables one to lunge totally into the immanent world of experience. In an article from 1939 Camus claimed that “To establish the absurdity of life cannot be an end but only a beginning”. Thus he saw in the struggle of Sisyphus the means to go beyond nihilism. Camus concludes his interpretation of the myth as follows: “The struggle itself towards the heights is enough to fill a man’s heart. We must imagine Sisyphus happy”.

In a similar way, Kazantzakis sees this approach of Sisyphus as a way beyond nihilism and despair. In a letter dated cober 21, 1947, he wrote to his friend, the Swedish politician Borje Knos: “’What is the right path?’, an Indian proverb asks. ‘The path of God’.’And what is the path of God?’ ‘ The uphill path!’ Humanity will once again take the uphill path, like Sisyphus” .

Kazantzakis proceeds to refer to himself as a “tragic optimist” which, according to his wife Eleni, describes someone who “has confidence in man, who looks straight at the demon of destruction, hates it, but is not afraid of it, because he knows that all destruction is but the preparatory stage to a new creation” . This emphasis on destruction as a “preparatory stage to a new creation” is based on Kazantzakis” belief in his present epoch as a transitional age, an age that must seek to “create a new channel for the spirit” , and move from a “middle age” to a “renaissance”. This desire for a “new channel for the spirit” is a result of the dissatisfaction Kazantzakis felt with the overtly materialistic approach of communism. In order for humanity to continue ascending the uphill path” and hence achieve freedom from the obstruction of materiality, Kazantzakis asserts that the creative artist must flourish . This is an idea largely influenced by Bergson’s notion of the vital impulse in life, l’elan vital, which seeks to conglomerate with matter in order to overcome it.

Using his own idiosyncratic language and philosophy, Kazantzakis claims that in working with matter, the artist creates the “channel for the spirit” that is required if the “uphill path” is to be continued. In Kazantzakian terminology, humanity must become “The Saviours of God”.

Kazantzakis is at one with Camus in his insistence upon a revolt against the guaranteed frustration of all actions. In his epic The Odyssey: A Modern Sequel, the hero Odysseus begins his journey by saturating himself with the excesses of sensual pleasures, as does Don Juan, one of Camus’ examples of an absurdcharacter. However, after the destruction of what Odysseus saw as his ideal city, in Book XV of the epic, he realises the futility of all things before all-conquering death and seeks aesthetic withdrawal on a mountain to commune with his “God”. For Camus also, the inevitable outcome of a life imbued with the desire for short-term sensual pleasure is a movement towards asceticism. Camus’ favourite ending of the legend of Don Juan has the hero ending his days in a monastery.

Although both Camus and Kazantzakis desire a transcendence of nihilism through the acceptance of their limited fate and the strength issued therefrom, it can be seen that Kazantzakis has more spiritual reasons for embarking upon the “uphill path” of aestheticism. Both Camus and Kazantzakis maintain that one must cry out against futility and frustration. Kazantzakis asserts that, like the light that remains after an exploding star, this cry must remain after the voice no longer exists. Thus, the cry is the catalyst to artistic creativity and only artistic creativity can enable the continued ascent up the path that leads to freedom and hence “saves God” from material imprisonment. In his work, Kazantzakis retained a hope for himself and the future progression of humanity.

Although he came close, he was never awarded the Nobel Prize, narrowly missing out to Juan Ramon Jimenez in 1956. However, it is poignant that, after his death, his wife received a letter from Camus, awarded the Prize in 1957, in which he claimed that Kazantzakis deserved the honour “a hundred times more” than himself. The letter, dated March 16, 1959, shows the affection Camus felt for the Cretan:

“I have always nurtured much admiration and, if you permit me, a sort of affection for your husband’s work. I had the pleasure of being able to give public testimony of my admiration in Athens, at a period when official Greece was frowning upon her greatest writer. The welcome given my testimony by my student audience constituted the finest homage to your husband’s work and acts could have been granted. I also do not forget that the very day when I was regretfully receiving a distinction that Kazantzakis deserved a hundred times more, I got the most generous of telegrams from him. Later on, I discovered with consternation that this message had been drafted a few days before his death. With him, one of our last great artists vanished. I am one of those who feel and will go on feeling the void that he has left.”

As Camus notes, Kazantzakis had sent him a telegram congratulating him on his Nobel Prize. This telegram was sent from a clinic in Freiburg, Germany, where Kazantzakis spent his last days, cheered by a visit from Albert Schweitzer, before he passed away on October 26, 1957.

Kazantzakis was one those rare breeds who felt the pulsating rhythm of life pumping through his veins and was able to transfer this rhythm into his works. He penetrated to the core of human passions, hopes and fears and managed to distil this into the very marrow of his characters. Whether it be the fierce and fearsome Captain Michael in his self-sacrificial struggle for Cretan liberation described in the novel Freedom and Death, or the strong-willed yet scared Manolios, chosen to represent the figure of Christ in a village play in the work Christ Recrucified, or even the loveable, larger than life Alexis Zorba who informs us that the greatest sin is not to sleep with a woman when the chance is offered, we are greeted by characters who epitomise Kazantzakis’ desire for both political and spiritual freedom. Some of the last words he spoke to his wife capture his attitude to life: “I’m thirsty”, he lamented. Like his perpetually searching, experiencing and homeless hero Odysseus, for whom the goal of Ithaca is the journey itself, Kazantzakis would have scorned the idea of resting in peace.