the American political satirist P.J. O’Rourke recently published Age And Guile, which gathers together previously uncollected material spanning his 25 years of journalism. PJ has built his merciless literary reputation on three things: irritating American liberals, abusing chemicals and visiting every warzone in the world. Usually all at the same time. As he puts it, “I deal with curses of Western society of the past two hundred years starting with the French Revolution. I don’t start with the American Revolution for the simple reason it wasn’t a revolution. It was some form of parliamentary disagreement, who’s in charge here, sort of thing.”

Meeting P.J. O’Rourke in real life, however, is somewhat different. Impeccably courteous and good humoured, the only vice he displayed in my presence was smoking an enormous Havana cigar. I asked him what he thought of this difference between the public and the private PJ. “I’m 48 years old. I even had a middle aged dream last night. I dreamt I had a fifteen year old mistress. No sex, not even touching. She was just my mistress. And I knew I was middle aged because when I woke up, I was almost glad it was just a dream…I’ve always exaggerated that boyo stuff a little bit, just because it’s fun. I’ve always thought it very important to have a fool in your writing, and here’s one that’s always handy and never sues. I once lived harder than I do now. I was blessed with a self-limiting body. Drink too much, stay up too late, take too many drugs, scramble after too many 16 year old girls – I get ill. And the people who didn’t get ill – are dead…”

So you’ve never tried to keep pace pharmaceutically with Hunter S. Thompson, your long-time friend and political sparring partner? Medical textbooks are being written about that man’s constitution… “Hunter’s very shy. People don’t really understand that. He has to get loaded to deal with strangers, he can’t do it otherwise. He takes on that gonzoid persona as a kind of armour against the world. I watch other people gonzoing around, I don’t so much do it myself. Hunter’s very funny if you know him, because after he’s done all those appalling things, wrecking all the furniture and scaring everyone out of the room and terrorising the place, he turns round and says, “Do you think they were upset? Did I embarrass anyone?” “No, you just set fire to the rug…” 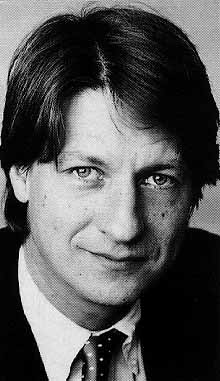 Hunter still seems to believe in the ideal of the American dream, as evinced by his last book, Better Than Sex, which charts Clinton’s inexorable presidential campaign. You seem to take a distinct relish in propagating the image of yourself as a son-of-a-bitch Republican. Yet much of your writing is distinctly humanitarian in places… “Well, both of those things are true. People on this side of the Atlantic get confused about political conservatism. It is not an excuse for selfishness. I don’t think that a person is left wing or right wing according to whether or not they are compassionate. A lot of people on the left, especially the more po-faced ones, have worked that angle. Lots of people are right wing because they’re selfish, there’s no doubt about that – I can’t defend that, I can only point out lots of people are left-wing because they’re selfish too. The Hilary Clinton world-view is bossing people around on the basis of a supposed virtuousness – “I care more than you care – therefore I’m going to boss you around.” If they couldn’t operate that system, then no other system would suit.”

Your concern about American politics is evident from the most recent pieces collected in Age And Guile. Does this mean your interest in globetrotting is waning? “I am a little tired of the Third World travel, part of it’s just age, it’s tough on the system, tough on the gastro-intestinal tract. A little bit of it is facing different kinds of suffering that I really don’t know what it is I could do about it. I’ve written about it to the best of my ability. I don’t think the causes of it are too mysterious. Particularly the sort caused by human folly. After finishing All The Trouble In The World, I took some time off from my commitments to Rolling Stone. I knew I’d had a good summer because I had tanned feet. It’s always a good indication of having done fuck all. The next thing I want to do is about economics, which also involves travelling, but it should be slightly more pleasant. At least here I’m dealing with human endeavour to better oneself and one’s time, rather than the human endeavour to whack each other over the head. It should be a bit more optimistic. I’ve never read an actual explanation of economics that was fun to read So I’m going to pick out different economies around the world that represent different attempts to organise socially: socialism that works, socialism that doesn’t work, adaptation to a market economy that’s successful, adaptation to a market economy that’s troubled. There’ll be a Holidays In Hell aspect to it, but at least people won’t be shooting at each other – much.”

Do you think your writing has any tangible impact on its readers? For example, the ecological chapters in All The Trouble In The World (lovingly titled “We’re All Going To Die” and “We’re All Going To Die Anyway”) provide an excellent retort to eco- hysterics – it might change a few minds… “I just don’t know. So few people read books. America is an ill-educated country. It’s sad what it takes to get on the best-seller list; for a hard-cover non-fiction book published in the Spring, which is the weaker period, selling as few as 30,000 copies will get you on the list. Isn’t that shocking for a product that costs $20-$25 in a nation of 250 million people. More usually it’s 50,000 or 100,000, but still, it’s so few. I can’t begin to tell you if it has any effect.”

After 25 years of writing, and nearly a half-century on the planet, do you have any words of advice for young people? “No, I can’t figure out where I went right. I love to count it up to my fabulous skill and my insights and stuff like that, but I think it’s just because I stuck to it. There’s a Woody Allen line about how it’s remarkable how much of life has to do with just showing up. And I think about all the people I was working with 25 years ago, many of them much more talented than I was. Well, I remembered not to die from drug overdose. “To do: Don’t die from drug abuse”. Mostly I just stuck to it, and a lot of them didn’t. I just kept plugging away, probably out of inertia more than anything else. And I think if you do keep doing something for a while, you do learn how to do it. You learn how to work around areas of huge inability.”