At the risk of turning into one of those dreadful thirtysomething nostalgia bores, the Tom Baker incarnation of Dr Who has a special place in the hearts of those of my generation. Forever fixed in my mind is the time I queued for hours with hundreds of other grubby pre-teens in a smalltown bookshop awaiting the arrival of the great man to sign books he hadn’t written. The cops sealed off the high street, which was lined with kiddies wondering where the Tardis would materialise to disgorge the tousle-haired timelord. Suddenly he appeared, striding down the middle of the road in full Who garb, dishing out jelly babies to the gobsmacked hordes.

My illusions took a slight dent a few years back when I saw one of those unbroadcastable out-take reels BBC technicians compile to amuse one another at Christmas, in which Baker was shown getting saucy with an assistant and taking the piss out of K9. But that’s as nothing compared to the revelations in this indiscreet autobiography. It seems Baker’s worst enemy during his years of national fame wasn’t the Daleks, the Cybermen, or any of the other low-budget latex terrors, but the Shagmonster. And like all the best monsters, this one turned out to be – gasp! – himself. "While we were on our tours about the country to promote the programme, I was often pulled by women who were keen fantasists," he confesses, introducing tales of hotel room bondage sessions ("A good few of these women wanted to whip or cane me") and general pervery (a university don insisted on wearing his costume, "and as she threw herself wantonly on to the wide Holiday Inn bed she growled, ‘Come on, Doctor, let’s travel through space’"). Alas, the man with the sonic screwdriver had no advanced defence against venereal disease, and soon contracted a dose of the clap. 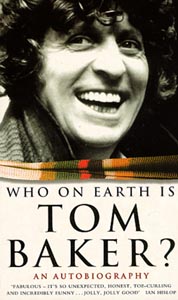 Dr. Who enthusiasts may initially be disappointed to find that the programme doesn’t get its first mention until page 189, but to skip the first 15 chapters would be to miss a real treat since Baker seems determined to show himself in the least flattering light imaginable, as if to demonstrate the veracity of a remark he once overheard: "He’s quite nice. But there’s something odd about him, something slightly disgusting." The book opens in wartime Liverpool, where poverty-stricken young master Baker prayed for a bomb to drop on his mother so he’d be orphaned and eligible for treats from the Americans. By the age of nine he’d become a thurible swinger and learned to fake tears at funerals to get bigger tips. A year later, he discovered the joys of solvent abuse ("I couldn’t walk past a tin of floor polish without having a furtive snort"), which helped set him on the path to a lifetime of misery and self-loathing, abetted by National Service, the National Theatre and a failed attempt to please his family by becoming a monk.

A recurring theme is that common actors’ lament, the lack of any sense of identity, which isn’t helped by the fact that he’s so frequently mistaken for Jon Pertwee, Jonathan Miller and – bizarrely – Shirley Williams. But although he’s understandably irked to be accosted by strangers about the havoc he wreaked on the grammar schools, Baker seems curiously flattered when people remark, as they often do, that he reminds them of a favourite aunt. Not that they want to be around him for long. "I’m afraid I have no gift for friendship," he writes at one point. "I quickly get tired of people and off they go. Only the other day I tried to think of a single friend I had made in my life and drew a blank."

But while Baker wallows in his own perversely appealing creepiness, he doesn’t get anywhere near an answer to the question posed by the book’s title. His long-suffering wives, who might have been invited to shed some light on this mystery, get the briefest of walk-on parts – barely a paragraph in the case of Lalla Ward, who buggered off to shack up with proselytising Darwinist Richard Dawkins – when Baker wishes to illustrate his talent for appalling misjudgement or self-pity. He once even failed to recognise an ex-wife at a party.

Nor does the story end, as one might expect, with timelord totty excess, as Baker went on to enjoy several Soho Boozing Years with the late Jeffrey Bernard, Francis Bacon and chums, which provide a further rich seam of anecdotes. These days he happily potters about in his local graveyard polishing his own tombstone, enjoying strange encounters with scary fans paying their respects, and occasionally treats himself to lengthy visits to the household goods department of John Lewis. "I particularly enjoy the ironing-board section. I find I can pass an hour or more admiring the various ironing boards. The Brabantia is my favourite. I have a very good model with a flowered cover, pretty though fading slightly. It folds so smoothly that all fear flees. It’s the folding action of good modern boards that has removed the terror that so many men used to feel at the prospect of opening or closing the old, temperamental type of ironing board when naked."

Call me a sick fuck if you must, but I closed the book liking him even more.