“My career is based on the fact that I’m close enough to the boomers to be able to speak their language, but close enough to the busters to understand what the hell it is that they’re doing. I’m one of the hinge generation. I’m a translator of what’s going on.” So says Douglas Rushkoff, a man considered as one of the leading authorities about the impact of the information age on popular culture, despite his protestations that there can be no experts in the chaos of the mediasphere. A technological evangelist who has continually defended the utopian possibilities of new media, Rushkoff is one of those rare journalists who possesses a genuine enthusiasm and excitement for his chosen subject.

As well as frequently appearing in the US media and lecturing around the world, Rushkoff also writes the Cyberlife US column in The Guardian’s Online supplement. His latest book, Children Of Chaos: Surviving the End Of The World As We Know It, (released as Playing The Future in the States) sets out to explore the new global culture, arguing that our old ideas of national and social boundaries or predictable, linear and hierarchical civilisations no longer describe the world in which we live. Rushkoff points to France’s culturally protectionist policy, which has recently demanded all webpages hosted within France to be available in both French and English, as an example of this old-style thinking.

“France is putting up its barriers against the internet because it considers it an intrusion of American media and it’s afraid it’s going to get consumed,” he says, “but all they’re doing is weakening their place is the global marketplace of ideas.” Rushkoff maintains that through interactive technologies, we’re now immersed in an increasingly complex, user-controlled mediasphere. Global media has decentered power and given rise to a chaos of information overload. The people who have grown up in this complex, discontinuous, environment – screenagers, as Rushkoff tags them – naturally feel comfortable within it. And it is they who society has to look to if it wants to understand how to adapt and benefit from the potential of new media.

While its title may seem to indicate jumping on the ubiquitous end of the millennium fear and loathing bandwagon, Rushkoff’s book is actually a prediction of the dazzling possibilites which technology offers us. The world as we know it is coming to an end, but as R.E.M. would say, we should feel fine – because what’s emerging is all for the better, if Rushkoff is to be believed.

At the time of this interview, Wired Ventures had just announced that the English edition of Wired magazine was about to be folded, another sign of the American company’s ailing fortunes. In his Cyberlife column a few weeks before, Rushkoff had commented on Wired’s failure in the US to float itself on the stock exchange. His assertion that there are no experts in the mediasphere was effectively demonstrated by the lack of faith from financiers in Wired’s attempt to set itself up as the definitive organisation to predict the trends of the future.

“I’ve just been asked by The Guardian to write the next column about Wired UK being folded,” Rushkoff says. “I’m a little scared that Wired might come after me. My Cyberlife column is about how Wired is a front for a right wing libertarian social reformers. It’s the promotional arm of the Global Business Network. They’re a group of advisors who are pretty much the same as the masthead of Wired. They hire themselves out at $10-$15,000 an hour and when someone gets to join the GBN, their face appears on the front of the magazine and they’re touted as the new great media theorist. When a company hires the GBN and follows their advice, their director magically appears on the front cover.”

“So Wired is effectively like a newsletter for the GBN and they’ve never really disclosed that. I tried to say something nice to end the article, which was ‘Frankly I liked a lot of what Wired’s writers had to say, the editor in chief was one of the smartest people talking about new media in the world. However, when a magazine does not disclose its true cultural agenda or its relationship to its subjects, but manipulates its readers into a state of suggestible anxiety, through cleverly exploited language and design, I am tempted to reject the whole publication just as the UK did.'”

It’s precisely this problem of coercion occurring through the media in all its many forms that Rushkoff is most concerned with. The possibilities of interactive technologies being able to break this stranglehold is what fires his enthusiasm. However, since publishing his first book, Cyberia: Life In the Trenches Of Hyperspace in 1994, Rushkoff has attracted a host of criticism. “I started to realise that people can’t perceive why I’m being optimistic about certain things,” he says. “Since Cyberia I’ve been saying that there’s a possibility that new media can herald a global renaissance, that these things are really empowering, this is interesting, let’s celebrate it. And then I get accused of breathy optimism. I’ve taken a lot of personal hits about who I am and what I’m saying. I think that I’m trying to be slightly more realistic about some of the hurdles we have to overcome.”

“I finished Children Of Chaos in August 1995,” he continues, “which was about the time when US corporations started to pour money into the World Wide Web. In the last two years we’ve seen a concerted effort by global media conglomerates to take over the internet. They see the WWW as a broadcast application, when it’s an interactive space, and they really are trying to divert our attention from talking to one another to coerce us into listening to the same kind of stuff that they’ve been pushing at us all along. 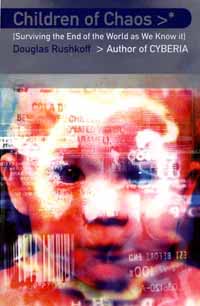 “The great thing is that now we’re seeing all the global corporations pulling out of the net. Everybody whose been using the net for these coercive purposes are going under. When I was promoting Cyberia, everyone was saying, ‘Oh, the companies are going to take over’, especially here in the UK. People would say, ‘How can you be so naive, the bad guys are going to come.’ And I said, ‘Let them come. They’ll build all this stuff, they won’t be able to make any money and they’ll go away, leaving behind the infrastructure for everyone else to use.’ And that’s what happened. What the corporations didn’t take into account was that interactive media would create a more media savvy audience, which is what my previous book, Media Virus! and certainly Children of Chaos is about. There’s a generation of people growing up who understand the language of media like natives and they just can’t be coerced using these techniques anymore.”

Unlike most commentators on the future, Rushkoff doesn’t share the misanthropic views of new inventions being always used to make things worse. Indeed, he goes completely against the prevailing opinion that the gadgets may change, but the people remain the same. “I think that human nature evolves along with technology. I don’t see a nature/culture divide, because I see technology as part of nature. A beaver’s dam, a bee hive, an anthill, those are natural things because animals made something. But as soon as man makes something then it’s not natural because man made it. That can’t be right. There’s nothing that’s not natural. Which is why I have a problem with the original cyberpunk authors like William Gibson and Bruce Stirling. They keep envisioning these wonderful technologies coming about, but they say human beings are human beings, and if they have the ability to do organ transplants then all we’re going to have is a black market in stolen organs.

“It’s more of a Power Rangers idea, but I think as we get new technology we’ll become more communal, co-operative and tolerant. There is a corresponding increase in what could be called innate morality as we develop interactive technologies. In America, we’ve destroyed virtually every civic space, and in the UK you don’t have much more. America is suburb strip mall hell. There’s nowhere to go and nothing to do. I see interactive media as a remedial help for a society that really doesn’t have any more open conversations. I think it’s working for young people as a community space. So while you can have the development of coercive technologies, where people become more paranoid and suspicious and controlling and controlled, you also have people like NASA developing technologies where entirely different things are happening. I think our technological progress is our moral progress.”

Similarly, Rushkoff has little time for theorists like Edward Tenner, whose book Why Things Bite Back posits the revenge effect, the idea every technology solves a problem but in doing so generates unforeseen new problems. “That’s very akin to what Marshall McLuhan called ‘the reciprocal effect’, that with every extension of media there’s a corresponding amputation of some sense, like rock music makes us deaf and television makes us blind. I think it’s a distorted Protestant outlook, that for every good thing you get there’s a corresponding bad thing. It’s the sort of mentality where people refuse to believe that something can be truly good, without some undertow. But you can’t live your life forever under the expectation of recoil.”

Perhaps what sets Rushkoff apart the most from his peers is his belief not only in the possibilities of technology, but its employment by ordinary people. While information technology is usually regarded as the preserve of an intellectual elite, Rushkoff argues the opposite. “The cultural agenda in bringing out intellectual arguments about things that usually aren’t credited with any intellectual merit at all, like Power Rangers and MTV, is to say that the so called masses are far more intelligent than anyone gives them credit for. Our general population is extremely intelligent and having a very deep experience with the media they’re involved in and that should be recognised. Which is why I get such awful reviews in the States, because they always say, “Oh Doug Rushkoff is giving kids ammunition to explain why they watch Beavis And Butthead. They don’t get all of this meaning from it, but they’re going to say that they do.” And I think that’s wrong. My books wind up being valuable to kids because they give them verbal arguments to use against their teachers and parents about what it is they’re doing.”

“The reason The Simpsons work is because we live in a world of coercive media and they’re a joyous release from that precisely because the programme’s creators understand that and satirise it. Interestingly, Beavis and Butthead aren’t going to work anymore because MTV has virtually abandoned the rock video, so there’s nothing left to satirise. And MTV have dropped the rock video precisely because watching Beavis and Butthead has meant that kids just can’t take rock videos seriously anymore. They’ve literally changed what we watch on TV. We’ve got a new depth of perception.”

It’s this new perception that gives rise to Rushkoff’s belief in the possibility of power being devolved away from the media corporations and put in the hands of the public. “Things will only go horribly wrong if we as a media consuming culture decide to value more what they’re selling than we can get from each other via the net or any other method. And if we value what they’re selling, we’ll get what we ask for. If people would rather watch Rambo than talk about Chomsky, then that’s what they’ll get. Right now what we really have is an opportunity for the people of this world to take charge of the global agenda. The controllers of society let the wars of society be fought in the ideological realm, which is the mediaspace. But now they’ve lost reins of the coach and I’m encouraging the idea that anyone can pick them up.”