“I’m in a fairly lonely position as a British woman writing science fiction,” says Brighton-based novelist Gwyneth Jones, but then, it’s always lonely at the top. Her new novel Phoenix Café has recently received widespread acclaim from the national press, which is a rare event for a science fiction book. But Phoenix Café is not your average futuristic pulp fiction of raygun death and heroic derring-do; rather, it heads off into disturbing territories rarely associated with Jones’ chosen genre.

“This is the third book I’ve written which follows the chronology of an alien invasion of earth by the Aleutians,” Jones explains. “White Queen is about first contact between the Aleutians and Earth, North Wind shows the Aleutians at the height of empire on earth and the new book, Phoenix Café, is about their disengagement from our planet. These three books are a sort of parallel version of the European invasion of Africa in the last century. It’s about encounters with otherness – what happens when a people get invaded and dominated by a bigger culture and a snazzier technology.”

The depth of Jones’ work is reflected by the amount of historical research she does in the process of writing, but she rejects the idea that her books are somehow a coded history of Europe. As she explains, “My story doesn’t exactly fit onto the story of European colonialism but I do take analogies from history and use them. During the writing of Phoenix Café I was thinking a lot about the British disengagement from India, which was such a shambles. And the same with Africa, where the general European attitude was “We don’t care whether it’s very convenient for you or not, but you’ve now graduated to being a democracy and we’re going home.” The cover is that it’s a great achievement and these countries have won their independence but it’s actually a cynical exercise in dropping everything because it’s a mess, and that’s exactly what the Aleutians are doing to Earth.” 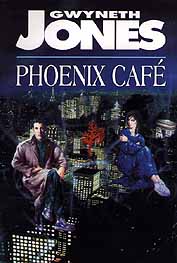 Jones sees these horrifying historical themes being unconsciously projected into Stateside science fiction: “In the vast majority of American SF, there’s only two options when the aliens arrive – they’re either going to kill everybody or enslave everybody. This is the American version of colonialism because they know that’s exactly what they did themselves with the genocide of the Native Americans and slavery. At the same time,” she continues, “it’s not that clear-cut either, because the history of colonialism shows you don’t walk away and leave a ruin. The people left in Africa and India can’t disentangle their culture from ours and that’s what I’ve tried to write about in Phoenix Café – what do you do when the aliens go home? The attempt to try and remember what you were like before their arrival is impossible. Essentially, I didn’t want people to read the book and think “native people equals good, invading aliens equals bad” because I don’t think that’s the case. There’s corruption on both sides. It’s extremely complicated, just as it is in real life. That’s why I like to work with science fiction – it allows you to try and get across the most challenging and abstract ideas.”

However, you shouldn’t get the idea that Jones somehow sets herself above the likes of Independence Day. As she says, “I get as much of a kick out of seeing the Empire State Building explode as the next person. What I don’t like is the current resurgence of anti-reason. These great conspiracy theories that blame everything on aliens, that try to say events have got nothing to do with not having voted in the last election or that a few of us are getting richer while a lot of us are getting poorer. It’s the counsel of despair. The aliens are a non-political displacement of anxiety – don’t buckle down and fight, don’t think anything radical, just blame it on the aliens or any other occult power.”

Still, Jones is not a complete sceptic when it comes to the question of extra-terrestrial life: “The idea that there is no life out there seems to me to be very weird. It seems to me reasonable to presume there are plenty of other life-supporting planets out there, On the other hand, the people who think it’s a likely idea that aliens will get here, or that we will meet aliens or even encounter an alien signal, haven’t grasped the scale of the universe or even the galaxy! I think the odds against us encountering an another species are astronomical.” Jones pauses, and then wryly concludes, “The Aleutians only find earth by bumping it into it by complete chance.”