“…with this far less feted CD, the Long Blondes definitely made the best album of that year, on every level…” 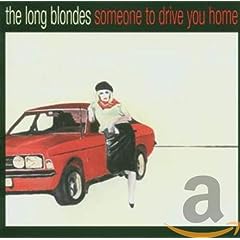 Someone To Drive You Home – The Long Blondes

See all albums by The Long Blondes at Amazon.co.uk | Amazon.com

To be one of the immortals, one of the greats, a band needs two things. The first, surprise surprise, is fantastic songs. Of equal, not secondary importance however, is image. “Heresy!” comes the purist cry, “it should be all about the songs, craftsmanship, the flick of horny white finger on plectrum, never in all my born” etc. etc. Ridiculous and stupid of course. Image is not just looks and clothes, though it is that too. Image is the attitude, the stance, the philosophy, the essence. The excitement this elicits is just as vital as any middle eights. In the past few years two bands have groped at the mantle of immortality, but have fallen down on one of these two vital elements.

Franz Ferdinand had and have terrific songs, but not the image. Gorgeous, cerebral, majestic tunes with an eerie blankness at their centre, coldness as a result. The Libertines were the other extreme, a fantastic Arcadian mythology, literary and passionate at their core, but with only quite good songs to back it up. With the Long Blondes debut, we finally see something approaching the whole package. The Blondes, three girls and two boys from Sheffield togged up in retro-bargain chic have both an unfailing knack of pumping adrenaline from all the right places and the alchemic ability to turn rank seediness and neediness into weird pop-greatness. No trick is missed.

Singer Kate Jackson, bedecked like a bohemian secretary from one of Reginald Perrin’s more outré yet understated fantasies, has a magnificently imperious voice which draws from the best haughty ice-queen traditions of greats like Siouxsie, not just emulating but embracing this pedigree. Jackson is a stunning front-woman with the young but old at heart paradox that the oddball pop greats have – youthful enough to be getting the action and angst, but aged enough to be terribly ennuish about it.

On the whole it’s not her writing the lyrics though, which are mostly down to male guitarist Dorian. The resulting hybrid is wonderfully pervy, exciting all sorts of contradictory emotions at once. A character emerges in the lyrics, jealous, brash, sad, devious, defiant; whose every instinct is brought expertly to life by the pinpointing of its surroundings. The voice is powerful enough to sweep you away in deliberate paradoxes; we sympathise with deviously amoral, premeditated plans to steal friends’ boyfriends in several tracks, while in others where the narrator is the victim the power dares you to empathise only; never sympathise.

Song after song celebrates the combination of the mundane and the glamorous and their hoodlum offspring:- seediness. Intelligent pop is stuck between high art and cabaret, and so seediness is its default setting, the greatest dare to explore this condition to the full. Both fellow Sheffielder Jarvis Cocker and the Mancunian Morrissey (the latter slyly alluded to in two songs) recognized this truth, and with the deft explorations of groping thwarted by stubbornly forbidding tights, addiction to half-forgotten film starlets, meditations on the weird freedoms offered by the British motorway system, descriptions of gin-fuelled desperation, and fraught worries about the significance of a lover’s arse-based tattoos, the Jackson/Dorian team prove themselves the heirs apparent.

A band cannot live on lyrics alone of course, and musically this is one hard-wired into the best traditions of weird pop greatness, supercharging along with the best bits of punk and indie, and managing the rare and eerie quality of forging the best bits of dance and disco too from this alchemic combination.

The other girls can do gorgeous Spectral harmonies, they can do the Riot Grrrrrrl shout bits too – both done equally well and without any hint of incongruity.

The Long Blondes are just amazingly, unbelievably cool. Cool in the sense of generating an aura which encapsulates a whole world of their own, a world where the urban and surburban grime and boredom make the glamour of the mind more and not less exciting. Cool in the sense of looking, sounding and feeling right all at the same time, and getting it right every time. Cool in the sense of not trying too hard. Cool in the sense that I can even write that word without feeling like a complete dickhead in enthusiastically describing them as such (you may think I sound like one, but that’s a quite a different thing.)

There’s no room to examine at length the wonder of the album’s many highlights, but the perfect sharp pop of single “Once and Never Again” should do. The slamming guitar-line and gorgeous backing-harmonies meld the best of both the 70s Ramone-punk and 80s-indie-jangle tradition. The tragically under-rated Primitives once managed this too, but The Blondes transcend even their greatness as that voice and those lyrics leave the forbears in the shade. Jackson takes the old-before-her-years (27?) standpoint of the older supportive friend berating the self harming, (“another drama round the kitchen-sink tonight/you said you cut yourself whilst washing up the knives”) damaged young teen trapped in a sad relationship in a killer chorus “19? You’re only 19 for god’s sake, you don’t need a boyfriend!”

The deadly double-meaning of the song emerges when it appears that the supportive narrator just might be exploiting the lass for a sly spot of “sympathy” groping: “I know how it feels, I know how it feels to be a girl your age, I could show you a thing or too, once and never again?” Thrilling, sinister, beautiful, perfect.

We all heard a huge deal about Arctic Monkeys, Amy Winehouse, Lily Allen and The Gossip in 2006. Rightly so, they’re good. But with this far less feted CD, the Long Blondes definitely made the best album of that year, on every level. I await their next moves breathlessly.