“…Saunders manages to amuse, entertain, and shake out thought on a great variety of subjects, and does so in a subtle, sideways style which could so easily be annoying but isn’t…” 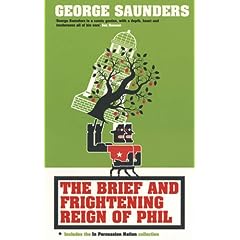 The Brief and Frightening Reign of Phil – George Saunders

Someone once wrote that producing comedy is a far harder art than penning tragedy. Shockingly, I believe it was a humorous writer who made this selfless observation. Whether accurate or not, what certainly is true is that whimsy is a surprisingly tricky ingredient to get the right measure of in writing. A tad too little and the result is weak and insipid, a dab too much and the brew is overbearing. And either way it is very, very easy to come over as smug. Think of the output of Punch in the 80s or a great deal of Radio 4 comedy today to see feel the horror of what can unfold. So when a writer gets it right, praise is due.

In his satirical fantasy novella The Brief and Frightening Reign of Phil published in 2005, and his short story collection In Persuasion Nation published in 2006 (and now reprinted together), Saunders hits the spot, lightly yet accurately.
The Brief and Frightening Reign of Phil (hereafter referred to as Frightening) is a dreamlike fairy story, twisted rotten. It tells of the plight of the inhabitants of Inner Horner, “a nation so small it can only accommodate one citizen at a time”. The other six citizens must wait their turn in the Short Term Residency Zone in the infinitely larger surrounding country of Outer Horner. Already existing at the sufferance of their benevolent surrounding power, the Inner Hornerites incur the wrath of the bounteous yet growingly impatient surrounding benefactors, when their small patch of ground sinks further into the earth.

“What are your people trying to pull?” said Larry.
“What’s that part of a guy doing in our country?”

“Our country shrunk” said Elmer, digging nervously in the dirt with his octagonal shovel-like receptacle.

“Oh please,” said Freeda, “You expect us to believe that? Our country never shrinks.”
“Decent countries don’t shrink,” said Melvin.” They either stay the same or get bigger.”

Irked at this taking advantage of their good nature, the Outer Hornerites come under the spell of the demagogic Phil, a mesmeric megalomaniac whose brain is constantly falling out of a rack at the side of his head. Each character in the story, incidentally, seems to be a kind of polymorphous, multilimbed humanoid/vegetation/mechanical hybrid, their peculiarities mentioned only in passing.
As I said, such whimsicality can very easily become trying. Political parables, which this story undoubtedly is, have their own pitfalls, and can be dreadfully preachy and forced.

Frightening evades both traps with its deftness of touch, its opaque absurdism side-stepping both the overly didactic and the twee. Imperialism, the vile hypocrisy of rich states imposing draconian migration restrictions on poorer neighbours, American arrogance, anti-immigrant populism, all these are undoubtedly alluded to, but seasoned with a healthy dose of cartoonish Dada-lite which kill off the sense of worthiness and disorientate enough to make you wonder whether what you have read has made any sense whatsoever.
Above all, it is just genuinely funny. The portrayal of the media’s role in fascistic Phil’s rise is fantastically portrayed, in both senses.

The humour in here is equal parts the satire and the absurdity, and such is the tone Saunders carries off with skill throughout. The ending of the story has the weirdly enchanting quality of a genuine fairy tale, yet with enough darkness to freeze the spine. A funny but chilly bedtime.

With In Persuasion Nation, Saunders’ tone diversifies massively while still retaining its core, a mock-simple critique of the wrong turnings of the America of today. It consists of a series of stories, mostly set in an unspecified near future where a creepy combination of consumerism, codification and bigotry hold sway. Some are simple one-line jokes writ large but writ well. “My Amendment” describes a citizen’s belief that not only should Same Sex Marriage be banned, but also “Samish Sex Marriage”.

I implore anyone who finds themselves in a Samish Sex Marriage: Change. If you are a feminine man, become more manly. If you are a masculine woman, become more feminine. If you are a woman and are thick-necked or lumbering, or have the slightest feeling of attraction to a man who is somewhat pale and fey, deny these feelings and, in a spirit of self correction, try to become more thin-necked and light-footed….

Sometimes the world described is not distinct from the present day at all. “The Red Bow” chillingly describes how mawkish emotional pressure can drum up mob violence as a small town turns psychotic following a child’s death. At the other extreme “Jon” tells the tale of teenage breakaways from a sealed- Brave New World-esque bubble environment, and is told in a stilted future-speak language.

At its most surreal, “Brad Carrigan, American” describes a cartoon sit-com of the future, one of whose characters becomes self-aware and has to be destroyed. Touches such as the raining of corpses bring it closer to the fairy-tale nature of Frightening, but with the macabre cranked up higher.
It’s a quality of Saunders’ writing that while the tone and style itself doesn’t usually alter too much; spare, droll, wry, and precise, it can not only describe a vast variety of worlds and situations, but convey and create a great array of moods within this language too.

Satirising is high on Saunders’ agenda, but his commitment to creating an authentic emotional atmosphere is higher. In “My Flamboyant Grandson”, the bewildered hero is desperate to bring his gay 7 year old grandson to one of the latter’s favourite musicals, and is in turn harassed by a weird byzantinne bureaucracy of officials with sinister technology seeking to punish him for not viewing enough adverts in the process. The snipes at bully-boy capitalist consumerism are enjoyable, but it’s the warm relationship at the story’s centre which is both its core and its most entertaining aspect, as is the intention.

In both the novella and short story collection Saunders manages to amuse, entertain, and shake out thought on a great variety of subjects, and does so in a subtle, sideways style which could so easily be annoying but isn’t. Its unobtrusive nature, its essential lightness of touch, makes it fall short of any claim on greatness, but on its own terms it succeeds, quite triumphantly so.