This isn’t a new book. The French original was published in 1964 and in English eight years later. But don’t dismiss it as out-of-date. Like the book it analyses, Marcel Proust’s In Search of Lost Time, it pitches the reader into the future with a rare vigour. Buy this re-issue and give your Alain du Botton paperbacks to Oxfam.

Like How Proust Can Change Your Life, Deleuze’s book reveals the various ways Proust’s novel can help the reader in everyday life. Yet where du Botton leaves it at that, entertaining us with biographical anecdotes like a well-read Agony Aunt, Deleuze sees the presence of the novel as the thing itself; the essential achievement. The novel, he says, is the culmination of an obscure apprenticeship to the signs the world emits. Right from the start, Deleuze insists that the novel is not about memory, as is commonly assumed, but signs. The laying bare of signs, through character and plot, is, of course, a traditional skill of writing a novel. However, it is Proust’s feat to reveal the process by which these signs work and how we might discern the truth of our lives from them.

To begin with, Deleuze divides the signs Proust encounters into three groups: the worldly signs (such as formal and fashionable gestures assuming a common reference point between people), the signs of love (those infinitely enigmatic messages emitted by the loved one) and the sensuous signs (those of the senses, obviously).

"The worldly signs are empty; they take the place the place of action and thought; and they try to stand for their meaning. The signs of love are deceptive; their meaning inheres in the contradiction of what they reveal and try to conceal. The sensuous signs are truthful, but in them subsists the opposition of survival and nothingness, and their meaning is still material; it resides elsewhere. However, to the degree that we achieve art, the relation of sign and meaning becomes closer. Art is the splendid final unity of an immaterial sign and a spiritual meaning."

You can tell from this passage that Deleuze is not making concessions to the inattentive. But whoever said the truth is easy? Not even Alain du Botton. Unfortunately, it’s even more complex than this, and I do not have the philosophical frame of mind to lay it down in plain words (or fancy ones, for that matter). What Deleuze does make plain, however, is that the search for truth depends on more than intellect alone.

"The mistake of philosophy is to presuppose within us a benevolence of thought, a natural love of truth. Thus philosophy arrives at only abstract truths that compromise no one and do not disturb. [.] They remain gratuitous because they are born of the intelligence that accords them a possibility and not of a violence or of an encounter that would guarantee their authenticity." 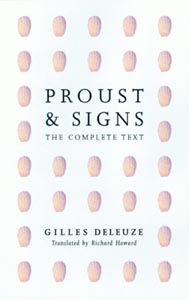 One might assume this chimes with the philistine assertion that philosophy, like art, is subservient to reality and is only a distraction from it. The philistines, though, are in thrall to the violence of the worldly signs, blown by the whims of fashion in all areas: "vacuity, stupidity, forgetfulness: such is the trinity of the worldly group" Deleuze writes.

Worldly signs could be said to be the novel’s equivalent to Dante’s Inferno, and indeed Deleuze says Marcel, the novel’s narrator, must pass through their hellish nature because, though they are empty, "their emptiness confers upon them a ritual perfection, a kind of formalism we do not encounter elsewhere. The worldly signs are the only ones capable of causing a kind of nervous exaltation, expressing the effect upon us of the persons who are capable of producing them." Think of any great charismatic personality: he or she presents to us a rich array of signs, but beneath it all, off camera as it were, he or she is lost, someone almost less than human. Our culture’s fascination with the charismatic individual means our most popular figures are those who emit the worldly signs across the board. They are the ones who never disappoint; they are nothing but show. If they are artists too, then the art is always shallow, secondary to the personality. Worldly signs constitute postmodern art.

Love is what makes the difference in Proust’s novel. When Marcel is in love, or sees love taking its course when Swann falls for the coquettish Odette, the worldly signs begin to unravel.

"The beloved appears unknown to us, implying, enveloping, imprisoning a world that must be deciphered, that is, interpreted. [.] To love is to try to explicate, to develop these unknown worlds that remain enveloped within the beloved."

Rather than accepting the surface signs, we want to know more; indeed we are desperate. But there are problems even when love is requited.

"The beloved gives us signs of preference; but because these signs are the same as those that express worlds to which we do not belong, each preference by which we profit draws the image of the possible world in which others might be or are preferred."

Jealousy is the inevitable result. Marcel sees Swann come "to regret each pleasure he enjoyed with Odette, each grace he discerned in her, for he knew that a moment later they would constitute new instruments of his torment". Deleuze concludes that there is a contradiction in love: "the means we count on to preserve us from jealousy are the very means that develop that jealousy." It is Purgatory.

Disillusion is at the heart of Marcel’s apprenticeship to signs. The apprenticeship depends, of course, on apprehending the signs. This happens in the work that Proust creates. So is the novel merely the description of personal growth – the familiar bildungsroman? Not quite. As Maurice Blanchot explains in an essay that seems to contradict Deleuze’s analysis, Proust’s found means of showing this growth in ornate situations – the familiar territory of the novel, aligning Proust with masters like Balzac while at the same time "eroding the edges of such tableaux till they merge with the flow of time and, gradually losing their fixity, stretch out in time, are absorbed and float along in the slow ceaseless motion [.] not as pure moments but in the moving density of spherical time."

Rather than contradict, Blanchot’s comments emphasise the Proustian dialectic of incessant apprehension and reinterpretation of signs that Deleuze so brilliantly reveals. The famous moments in the novel – the dunked biscuit, the ringing doorbell, the uneven cobblestone – are the revelations that enable Proust to write the events not as passed but as simultaneous to the time of narration. Their intensity is not a result of nostalgia but the presence of the past. These are the encounters that guarantee authenticity.

The ultimate encounter is, of course, with death. Proust began a feverish re-writing of the novel as the Great War began in 1914. Blanchot correlates this to Proust’s own impending death. The war gave him the chance to create ("to swim against his own tide") even as the greatest destruction began. If this is Paradise after the Purgatory of love, then it is a cold heaven for sure. Deleuze has something to say about the challenge of death, but, to be honest, I don’t understand it. Proust and Signs is occasionally baffling. But it is definitely worth the effort.

Deleuze died in 1995 aged 70. Distressed by a serious respiratory illness, but still with the use of his body, he threw himself out of a window. It ended his prolific output of books on philosophy, novelists, cinema and psychoanalysis (with his collaborator Felix Guattari). Throughout his work, there is a resistance to a totalising vision and the reductionism of grand and easy answers, such as Oedipal theory or Marxism. In the case of art, rather than seeing In Search of Lost Time as a means of closing off the troublesome past in a neat, rounded story, or providing aesthetic distraction, he sees it as the place where multiple worlds are revealed; it is where they meet and flourish. Art achieved to the Proustian degree is where we are fully realised as human beings: "there is no intersubjectivity but an artistic one."