I found Hunter S. Thompson by accident. I was looking through the stacks at my local public library, searching for something, I don’t remember what, when I read the title Fear and Loathing in Las Vegas on the spine of an orange paperback. It sounded vaguely familiar, so I took it off the shelf. The cover featured a cartoonish drawing of a man in a Hawaiian shirt with a long cigarette holder and a suitcase, looking very guilty about something. A jacket blurb by Tom Wolfe called the work I held in my hand a “scorching epochal sensation.” (Which is, in my opinion, the finest jacket blurb in the history of jacket blurbs. Congratulations Mr. Wolfe.) I was intrigued, so I opened the book and read the infamous first sentence, “We were somewhere around Barstow on the edge of the desert when the drugs began to take hold..” I had found exactly what I had been searching for.

I was a seventeen year old high school student at the time (an appellation which held the same appeal for me as terminal cancer patient) and the tale of a sportswriter and his crazed 300 lb. Samoan attorney on a drug binge so foul and extreme that it would have turned the most dedicated libertine into a card carrying member of the Prohibition Party was one of the most scabrously funny pieces of work I had ever read. It was a wonderful tale of possibility gone horribly awry, and by the time I was finished with it I had a lot of questions.

Who was this lunatic Thompson? Why hadn’t I heard of him before? Why was this book classified as nonfiction? Was it humanly possible to behave that badly and live to tell about it?

Thompson was in the right place at the right time and he did the right thing, clamping down on a raw nerve in the American psyche like a cranked crazed Gila monster, suffusing the collective consciousness with his own particular brand of poison. In the process he became the most celebrated, or at least most notorious, journalist of his era. Thompson’s poison still runs through the veins of America, and by extension the rest of the world, whose different regions, in varying degrees, are subject to regular transfusions of American culture. Thompson’s trademark phrase “Fear and Loathing” and its various permutations (fear and losing, fear and loaning, fear and loading…) have become cliches. He inspired Gary Trudeau to create his famous “Uncle Duke” character in Doonesbury, and Spider Jerusalem, the main character of Warren Ellis’ fine comic book Transmetropolitan, is obviously inspired by the good Doctor. 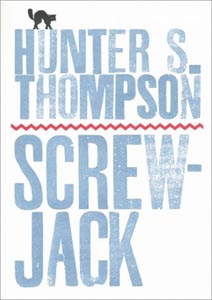 Back in the early 70’s when his fangs were still sharp no one could draw blood like Thompson. There is no reason for me to write that Vegas and Fear and Loathing on the Campaign Trail ’72 are seminal works, many people have said it many times and there is no point in dwelling on it now.

Thompson was a creature of his times. He thrived and grew on the possibilities of the ’60’s and turned viscous when cornered by the reality of the 70’s. He rose and fell with Nixon, running out of steam when his favorite villain was finally run out of town. Thompson’s own description of Nixon’s ignominious departure after his resignation, which can be found in his article “Fear and Loathing in Limbo: The Scum Also Rises,” reprinted in The Great Shark Hunt, is surprisingly joyless. Thompson writes:

” The end came so suddenly and with so little warning that it was almost as if a muffled explosion in the White House had sent up a mushroom cloud to announce that the scumbag has been passed to what will pose for now as another generation. The main reaction to Richard Nixon’s passing-especially among journalists who had been on the Deathwatch for two years- was a wild and wordless orgasm of long awaited relief that tailed off almost instantly to a dull, post-coital sort of depression that still endures.”

Indeed, it is worth noting that The Great Shark Hunt is dedicated to none other than Richard Milhous Nixon and that in the introduction he writes, “I feel like I might as well be up here carving the words for my own tombstone…and when I finish, the only fitting exit will be straight off this fucking terrace and into the Fountain, 28 stories below and at least 200 yards out in the air and across Fifth Avenue. No one could follow that act.”

One of the great literary ironies of the century that just ended may be that Thompson has lived long enough to fade away and not met the sort of spectacular end which he imagined for himself. Thompson himself has publicly recognized the awkwardness of his situation in the introduction to his first volume of letters, The Proud Highway, when he writes of pretending to be dead while his old correspondence was brought to light, and again imagines a spectacular end for himself, this time a high speed motorcycle wreck.

With the publication of his first volume of letters, and the subsequent publication of The Rum Diary, which was billed as “The Long Lost Novel,” but was none of those things Thompson seemed to prove that he is content to sit back and watch as the sort of works that generally get published after an author’s death hit the market.

In the last month two new Thompson titles have hit shelves. The first, Screwjack, isn’t even really a book, coming in at fifty-nine pages, with rather large print. It begins with a piece written during Thompson’s first encounter with mescaline (“Mescalito” is also reprinted in Songs of the Doomed) , which would become his drug of choice, and it only gets less understandable from there. The second piece is the tale of a doomed gambler, and the third, the infamous title piece, is almost too bizarre for words, dealing with a love affair between Raoul Duke and Screwjack the cat. Interesting, but probably not worth fifteen dollars, unless you are the type of person who simply must have this sort of literary curio.

The second book, Fear and Loathing in America, Thompson’s second volume of letters, is, unlike Screwjack, a must read. This book, the penultimate volume of a projected three volume set is, if you are going to buy one, the one to buy. Fear and Loathing in America reprints Thompson’s correspondence from 1968, after the publication of his first book, Hell’s Angels, through 1976, when the Great Gonzo Legend had become fully established.

The letters themselves aren’t as interesting as the ones found in The Proud Highway, but that is to be expected. During the years covered in Thompson’s first volume of letters he was, for the most part, unemployed, and had more time to dedicate to his personal correspondence. The beginning of America finds Thompson in a post Hell’s Angels funk that lasts for over three- hundred pages. During that time the Doctor wrestles with unfinished articles, a book contract, and attempts to find a new direction to take in the New Journalism.

At times, especially during its first third, is tedious. No one, especially someone who writes, wants to read about another writer’s lack of direction, no matter how much he or she respects that particular writer. Thompson spends a lot of time agonizing over a book he is supposed to write about “The Death of the American Dream,” As it turns out, Thompson considers Fear and Loathing in Las Vegas a side project, and not his American Dream book, which posterity has shown it to be. 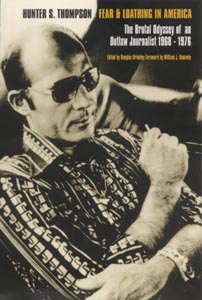 As the book progresses, however, it becomes more interesting, showing Thompson’s creation of his public persona, the character on the front of the paperback edition of Vegas trying to sneak out of a hotel with a suitcase full of drugs and some serious unpaid bills, and the subsequent discomfort that Thompson suffered when he became forever confused with one of Ralph Steadman’s drawings. F & L in America shows Thompson for what he really was, a workaholic writer with a brutal sense of humor who has an affinity for recreational drug use, and not a full-time addict who occasionally became lucid enough to write articles.

The most interesting disclosure in the book is the fact that Thompson was not on drugs when he sat down to write Vegas. In a letter to his Random House editor Jim Silberman, who stated that he did not think Thompson was on drugs, Thompson casually admits to being sober, but asks Silberman to hold his piece on the matter because the people at Rolling Stone (where Vegas was first published) were absolutely convinced that he had engaged in “a ranking freakout.”

A couple of years later Thompson feels quite differently about the image he put out there in Vegas, complaining bitterly when he is misquoted in Esquire as saying that “at least” forty- five percent of what he writes is true, and becoming incensed when Gary Trudeau debuts his “Uncle Duke” character in Doonesbury.

Reading this collection, one can’t help but get the impression that Thompson was feeling pressure to keep up an act that no one could follow, and that the publication of his letters is a way to once and for all to answer any questions anyone might still have about the “real” Hunter S. Thompson so that he can live out the rest of his life free from the compulsion to do himself in in a suitably dramatic manner.