With the publication of her new 75 year study The German Trauma, Eugene Byrne talks to Gitta Sereny

For someone who’s spent most of her adult life staring into the abyss, Gitta Sereny laughs a heck of a lot. “I love to laugh. I laugh a great deal. I think because of my early exposure, if you like, to tragedy and to the sad events in Europe, I have learned detachment and that is the most valuable thing for any writer, any journalist, any historian to learn. There are different sides to my life.”

Originally of Hungarian stock, she was born into a wealthy Viennese family in the 1920s, educated all over the place, including three years at an English boarding school, which she adored. One of her most vivid childhood memories is travelling home from England, getting stuck at Nuremberg and being taken to a Nazi rally – and loving it. She was all set to become an actress when the second world war intervened. She worked with orphans in occupied France, had to flee the country because of her Resistance connections, worked with refugees after the war, and since then has spent most of her life living in England after moving here when her American photographer husband Don Honeyman took a job with British Vogue. She became a journalist and author, with two principal areas of interest: Nazi Germany and its aftermath, and children who kill.

Gitta Sereny has long been a heroine of mine, and of many other hacks. Not only is she a formidable investigator who’s managed to persuade some of the world’s biggest newspapers and magazines to fund her probing (a stupendous achievement in itself), but she’s also a better interviewer than we’ll ever be. 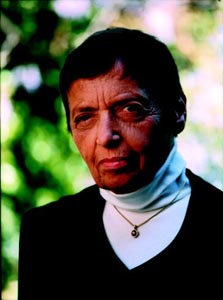 Here’s how good she is. One of the articles in her new book, The German Trauma: Experiences and Reflections 1938-2000, tells of how, in the 1970s, she interviewed Franz Stangl, who’d been commandant of the Treblinka extermination camp. He was in a German prison and she was hoping that, of all the Nazis she’d met until then, she was about to meet someone “less primitive” as she put it. Instead, she met a troubled soul in deep denial, a man who couldn’t face the truth of what he’d done. Nineteen hours after her last session with him, he died of a heart attack.

The German Trauma starts out with a fair amount of autobiographical detail, but then sort of loses interest. “I’ve always said that I’m not going to do an autobiography, and I don’t suppose I will, and I was tempted in this case to use the autobiographical means to explain to readers – because they’re constantly asking me this – why I do these particular subjects that I do. I just thought it would be interesting for readers to see under what conditions one does this.”

It’s a series of essays and articles written down the years, as well as more recent material dealing with Nazis and how postwar Germany is dealing with the Nazi period. It’s one of those books you pick up and think ‘potboiler’, before realising you’ve read half of it, swept away by a style that’s vivid, but which also manages a ruthless intellectual honesty. Of particular note are her chapters on the children of prominent Nazis, on the Ivan Demjanjuk case, on the heartbreaking stories of children abducted by Germans in eastern Europe and settled on German families. Her investigation into the Hitler Diaries fiasco, in which a German magazine and our own dear Sunday Times paid thousands for patent forgeries, reads like a superior thriller. Her suspicion as to what happened to much of the money makes for a chilling conclusion.

Among her several publications she’s probably best known for Cries Unheard, her book on the Mary Bell case, and for Albert Speer: His Battle With Truth. Speer started out as Hitler’s favourite architect, and ended up as Nazi Germany’s Minister of Armaments. Speer is covered in the book as well. 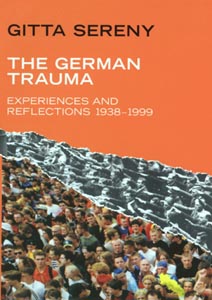 By Sereny’s estimation, Speer’s organisation of the German war machine prolonged the war’s misery by at least one year. That he was not hanged after the Nuremberg trials was partly chance, and partly because, although he was indirectly responsible for millions of deaths – those of slave workers and war casualties – he played no part in the Nazis’ extermination policies. He spent 20 years in Spandau prison but became close to Sereny in the years before his death. This was an extraordinary relationship; there were no other surviving individuals who’d been so close to Hitler, with whom he had an almost father-son relationship.

“I grew to like him,” she says. “And I’m very grateful to him. He talked to me a great deal. It’s an extraordinary thing to find a man as qualified as he who is willing to give what he did to me … He phoned me a lot. He was in great need of communication. It was his need, not mine. I learned a great deal from him. I think he knew more about Hitler than anyone else. He was more willing to search in himself for the reasons why what happened did happen, and that’s an extraordinarily courageous thing to do when you did as much harm as Speer did.”

One chapter which she’d intended to include, but cut out at the last minute, would have dealt with American academic Daniel Jonah Goldhagen’s hugely controversial book of a couple of years back, Hitler’s Willing Executioners. Goldhagen’s thesis, basically, was that all Germans were responsible for the Holocaust, and not just Hitler and the Nazi party.

“I’m so sick of Goldhagen that I decided to take it out,” she says. “His theory is that the Germans were exterminationalist anti-Semites since the middle of the 19th century, which is historically completely false, because in the middle of the 19th century, no-one’s borders were more open to refugees from Russian pogroms. It was a great age of liberalism in Germany … He simply doesn’t have a historical understanding, he doesn’t know history, and he has an emotional interpretation of Germany – which I understand in his case and sympathise with, but it is wrong … I think there was huge anti-Semitism in Germany, though there was more in Austria, and it was developed tremendously by Goebbels [Hitler’s propaganda minister], but all of this he does not understand and does not say … Germany did have 530,000 Jews, which is quite a large number if most of them were middle-class professionals, owners of department stores and things like that. That becomes very visible, and I think that that is a problem.”

As for the danger of resurgent fascism in Germany, Sereny is relaxed. “I think the last country where it would resurge is in Germany. There is a danger everywhere, particularly in Russia, which is so huge and where they are so nostalgic for the dictatorship they have lost, which cared for them from birth to the grave, and that is dangerous. Thank God we haven’t had this in the western democracies, and we don’t need to long for it. And in Germany they would simply resist it, because that lesson has been very deep – and that is what my book is about.”