With his critically acclaimed Washington DC Quartet, comprising The Big Blowdown, King Suckerman, The Sweet Forever and Shame the Devil, George P. Pelecanos has done for the mean streets of the Chocolate City what Raymond Chandler did for Los Angeles and Chester Himes did for Harlem. Pelecanos is a DC resident himself, and in his novels he simply owns these streets. It feels as if there isn’t a scene or a corner in the city that he doesn’t know about.

Such is the author’s dynamic and detailed presentation of a town tainted by crime and corruption, it is hard to imagine Washington DC at all without the towering shadows of his cast of pushers and private eyes, and weedheads and weirdos. Each of the novels stands up well on its own, but the four are best read as a whole, as they dramatically present the fortunes of several families over a number of decades.

Of the four novels in the series, King Suckerman is both the funkiest and the most fun. Set in the 1970s, it opens with a quote from a Curtis Mayfield song and a screening of “Black Caesar” and then manages to get cooler by the page. After a chance meeting at a North Kakilaki drive-in, badass blaxploitation fanatic Wilton Cooper and white bread wannabe hipster Bobby Roy Clagget head out for an adventure in DC. But when a drug deal in the city goes sour, they get tangled up in a web that involves small time dope dealer Dimitri Karras, Marcus Clay and the staff of music store ‘Real Right Records,’ restaurant owner Nick Stefanos and a gang of redneck metalheads.

Like the other instalments in the quartet, King Suckerman (the title gets better each time you say it) is a mind-spinning fusion of the best of James Ellroy and Richard Price. The novel is filled with hip references to popular culture and is scored to a funky soundtrack that includes the O’ Jays and The Jimmy Castor Bunch. Pelecanos’s characters spew slick, street dialogue and the author shows a keen ear for the occasional Chandler-esque simile, such as the description of a woman’s smile that is “as long lasting as a street-bought watch.” The action is kept well paced throughout and Pelecanos swiftly moves his tale towards a violent and fast-moving finale. 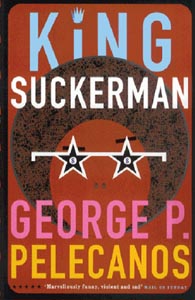 The DC quartet’s third instalment, The Sweet Forever, is often harder to stomach than King Suckerman, but is also just as hard to put down. Ten years on, the memories of the ‘Summer of ’76’ still weigh heavily on Dimitri Karras and Marcus Clay, both of whom are now nearing 40. Karras has moved from dealing pot to snorting coke, whilst Clay worries about his young daughter Neecie, who has begun to keep bad company. Set in the mid-1980s, this time the soundtrack is supplied by Cameo and straight edge hardcore, whilst moviegoers queue for “Top Gun” tickets. The majority of the novel is set over a period of three tense days, as citizens deal out their own justice to make up for the town’s corrupt cops and its ineffectual mayor, who is described as “an alcoholic, drug-addicted, pussy-addicted monster.”

Pelecanos handles his characters with the skill of top crime scribes like Elmore Leonard. He breaks down the large cast of each novel into smaller groups of characters and then deftly cuts between the lives of each, in a similar manner to cinematic crime stylists such as Martin Scorsese and Quentin Tarantino. He is also particularly strong at slipping into the minds of his characters, effectively displaying their inner thoughts in italics during their conversations.

Throughout the quartet, Pelecanos displays an impressive talent at moving from era to era, supplying each story with its relevant tunes and tensions, and the right drugs and TV shows that are appropriate to the day. The Big Blowdown is set in the 1940s, as jazz plays in bars in the aftermath of the Second World War. Similarly, King Suckerman is soaked in the residue of the recent war in Vietnam and explores the racial and social tensions that were rife in 70s America. Shame the Devil brings the action up to the present day, but also echoes the period of King Suckerman, since retro chic wrestles with R&B on the DC streets in the ’90s. Shame the Devil is a slightly disappointing conclusion to the series, and certainly lacks some of the energy and style of the previous novels. However, taken as a whole this striking crime quartet is a must for anyone who is interested in the low life of the U.S. capital.