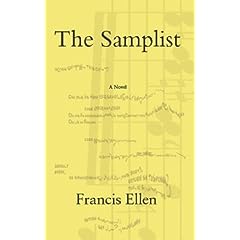 Mr Francis Ellen, author of The Samplist, has been ruffling the feathers of the literati – as any cheeky debutant should. For The Samplist is self-published, and Ellen has had the temerity to be reviewed in The Times Literary Supplement. To be certain, Mr Ellen has strong views on the publishing industry. According to an interview hosted on the ScreenBiz website , he didn’t send the manuscript of The Samplist to a single mass market or independent publisher. Why?

I didn’t see the point. ‘Publishing’ is a girl called Poppy who loves your book with a boss who won’t read it, and sending a first, unagented manuscript to a publisher is believing in Santa Claus and the tooth fairy and that love conquers all. It’s worse than a crap shoot but you’re not allowed to say that because it sounds like you’re being a bit thick about yourself.

Mr Ellen, then, has put his money where his mouth is. Was that the best place to put it?

The titular samplist is Alex, a student of a fictional music college in Glasgow. He is a passable pianist, but his real talents lie in the alchemical realm of sampling; not just the snatching of notes in order to cobble them together, but the craft of electronically simulating rooms, judging velocity, adding one or two mistakes, and generally fooling the experts that a computer-assembled piece was recorded live. Alex has two best mates. The first is Elliot, a Liverpudlian of Chinese parentage. His guitar skills are astronomically advanced of his peers and teachers. With it, he suffers an Asperger’s-like instability, and is withdrawn and effusively rude by turns. Alex’s second friend is Skuggs, a tubist whose virtuosity is matched only by his flatulence, which rattles every page in the book that sees his name. Last of the major characters is Laura, the beautiful Spanish violinist whose love for Alex is never fully justified, but provides a romantic counterpoint for much of the story.

The set up is straightforward. Alex is desperate to continue with his sampling, despite its reputation as the antithesis of musical expression. The fearsome – yet bonkers – McNabb is the college authority figure who attempts to thwart him at every turn. Other teachers are more sympathetic. The mannish Miss Ingles, for instance, supports Alex’s use of her expensive computer suite, and the cross- dressing Principal Todd is a warm-hearted, if ineffectual, figure. The stage, then, is set for a somewhat farcical, frat-com, character- driven story that meditates on the lives of our heroes and heroinnes. En passant, we examine the nature of musical interpretation and simulation.

The prose style does hit the occasional bum note. Francis Ellen likes to spell ‘bugger’ as ‘buggar’, and his use of punctuation seems inspired by free-form jazz. Ellen is also not immune to the charms of cliche, and these overworked phrases swell the text. Indeed, the overall impression is that this book is one draft away from completion. It has certainly been edited, but it’s difficult not to feel that the metal of the work has not yet cooled, and needs a few more whacks with the hammer.

Such violence would also benefit the story. It begins at fine pace: short scenes introduce the characters in a witty and accessible fashion; the bustling fussiness of this music college is delightfully painted. This momentum sees the reader well into the middle section of the book, where the writer indulgences his trainspotting-esque delight in the details of sampling, clean-up algorithms, and the hydra-like multiplication of acoustic problems. (This was interesting to your reviewer, an amateur musician, but it might stretch the attention of most readers.) The story does become baggy in its latter half. I wasn’t sure what Alex actually wanted to do with his music. Go for a record deal or eschew the materialism of it all? Sample his friends’ performances, or have them play live? What, exactly, are the stakes? But The Samplist shows enough verve in its prose style and characterisation to crash through this.

Oh, I forgot to mention the accompanying CD. It contains ‘performances’ recorded by the main characters. In sum, The Samplist is an enjoyable scramble through a certain world on which Mr Ellen has the dope. Excerpts will not appear in style guides, and its appeal will be limited to those like a good fart joke to round off a discussion on Bach as the composer’s composer. But, for all that, this self-published book is no vanity project.