It wasn’t a rock gig, it was an event. Journalists from all the major music papers were there, and even the local newspaper had marked the event with a special supplement. Celebrities air-kissed backstage, and the band took the stage in front of thousands of people. For Wigan musician Ed Jones, the gig should have been a triumphant homecoming, a sign that the years of tours and recording had been worthwhile. Unfortunately, Jones was in the audience.

The band was The Verve, and the gig was the now-legendary show at Haigh Hall. Jones was the bassist in the Tansads and, a few years previously, had played to packed venues with The Verve as the band’s support act. While Richard Ashcroft and co went stellar, The Tansads stumbled from one disaster to another. Hating his former friends, Jones quit the band in disgust.

Is Ed Jones bitter? You bet. Ostensibly the story of a band whose success never matched their ambition, This Is Pop is an extended v-sign to Jones’ former band members, record company and peers. Over the course of the book he paints a less than flattering picture of several indie heroes, from Jarvis Cocker throwing his weight around in TV studios to thinly-disguised allegations about Cast. The only band spared Jones’ vitriol is Stiff Little Fingers, with singer Jake Burns portrayed as a decent bloke in an industry notorious for backstabbing and one-upmanship.

Although Jones’ anger sometimes overpowers the story he’s trying to tell, This Is Pop is a fascinating insight into the realities of the record business. As Jones describes in detail, very few bands are actually making any money – even though they were appearing on Top Of The Pops, the seven members of the Tansads had a combined income of £25 per week. Touring is shown in its true colours, and the bickering over publishing royalties is depressingly familiar. 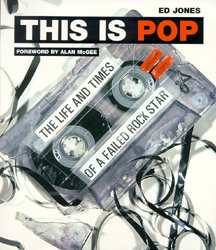 It’s obvious from the text that Jones still believes that the Tansads could and should have been pop stars, although few non-fans are likely to agree. For most people, the Tansads were an uncomfortable cross between The Levellers and Half Man Half Biscuit, a moderately talented novelty band forever destined to play the bottom of the bill at festivals. Jones clearly doesn’t see it that way, although his occasional descriptions of the band’s songs and lyrics do little to dispel the impression that the band’s lack of success might not just be due to the machinations of an evil record industry.

One of the problems with This Is Pop is that the events described in the book are relatively recent, and as a result Jones lacks the self-awareness found in similar books such as Giles Smith’s Lost In Music. While no doubt important to Jones, the frequent tangents describing how he comes to terms with the death of his father sit uncomfortably with the rest of the story, and the constant bitterness frequently damages the credibility of his tale. In particular, the portrayal of Tansads singer John Kettle is so devoid of any redeeming qualities that you start to wonder how Jones could have worked with him at all. Like most autobiographies, there’s a strong element of self-justification running throughout the book, and the few attempts at self-criticism are unconvincing. Had Jones waited a few years before committing pen to paper, however, This Is Pop would have lacked the splenetic outbursts that make it so compelling.

For all its faults, This Is Pop is very enjoyable and Jones is an entertaining writer. The vitriol is balanced by some very funny moments and, if you have even a passing interest in the music business, you’ll find plenty to get your teeth into. If you’re an aspiring musician, This Is Pop is an essential read – if you reach the end of the book and still want to be a pop star, you’re probably insane enough to make it.